The Federal Reserve has doled out tens of billions to calm the short-term lending markets after they went haywire in September.

But initiatives by the U.S. Treasury Department — to ensure it always has enough cash to pay its bills as the deficit soars to a trillion dollars — could make it harder for the Fed to prevent a repeat.

As the department copes with higher spending, large swings in the amount of money it has on deposit with the central bank have already undercut the Fed’s ability to keep bank reserves stable. Last year, one particularly big shift helped to drain so much liquidity from the banking system that it contributed to a spike in overnight lending rates.

Now, as Treasury considers setting aside even more money, market watchers say the swings are bound to get worse. That could lead to more disruptions and upend the Fed’s goal of scaling back its involvement in the repo market.

Treasury’s cash needs “have created dislocations that are putting greater strains on the Fed’s reserve management and funding markets,” said Ward McCarthy, chief financial economist at Jefferies & Co. and a former senior economist at the Richmond Fed. “But the Treasury needs to fund the government, so the Fed has to work around around that.”

The situation also underscores how America’s fiscal imbalance, which has been exacerbated by the combination of tax cuts and spending increases under the Trump administration, is putting strains on the financial system.

Though arcane even in finance circles, repurchase agreements — or repos for short — are what keep the global capital markets spinning. And that includes the US$16.7-trillion market for U.S. government debt. 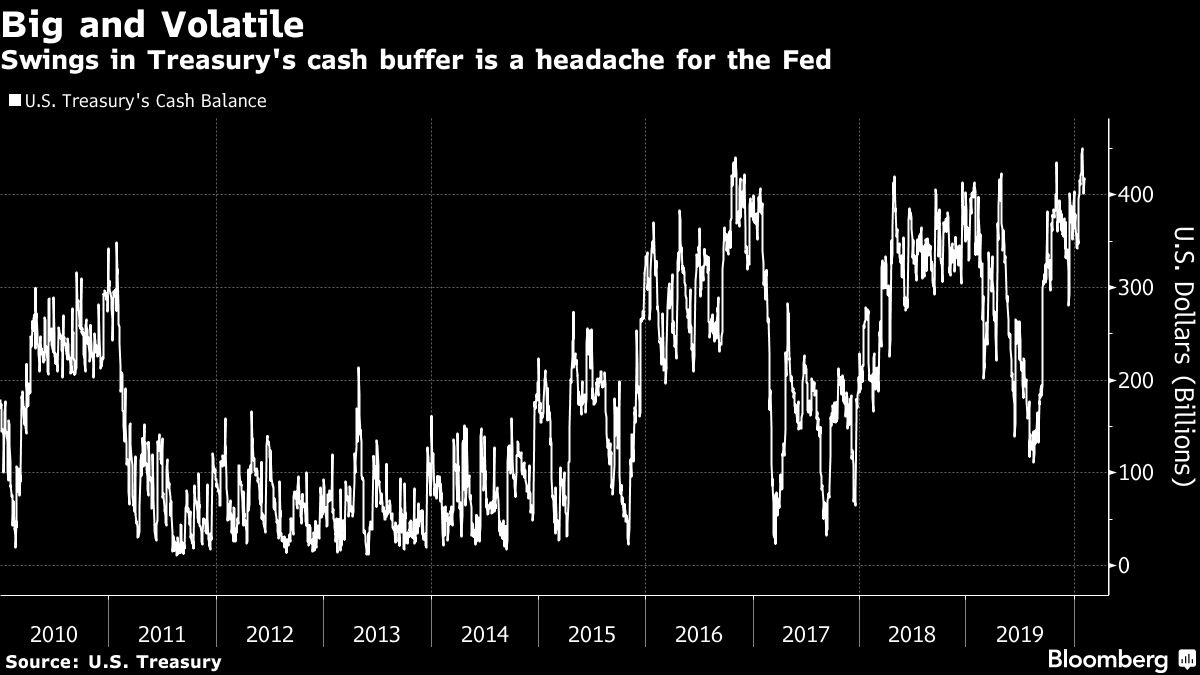 The Treasury General Account, as it’s officially known, operates like the government’s checking account at the Fed. Money comes in when taxes are paid out of bank accounts of individuals and corporations (which drains banks’ reserves held at the New York Fed) and money goes out when the government pays its bills (which does the opposite).

While the Fed has had to deal with fluctuations before, the sheer size and swings of the account in recent years stand out. Under the Obama administration, Treasury in 2015 instituted a policy of keeping at least five days’ worth of expenditures, or a minimum of US$150 billion, in case unexpected disruptions from natural disasters or cyber attacks locked it out of the debt markets. Prior to the change, Treasury had enough cash for just two days.

But that cushion has grown and become more volatile as deficit spending rose and cash flows in and out of the account increased. And the fluctuations have at times been exacerbated when Congress dragged its heels on the debt limit.

Since the start of 2019, the account balance has averaged US$303 billion, versus about US$240 billion in the prior four years. It has also swung as high as US$451 billion and dropped as low as US$112 billion.

All that money flowing in and out of Treasury’s account has made it harder for the Fed to keep reserves in the banking system stable, and crucially, to manage monetary policy. That’s contributed to abrupt swings in repo rates, which spiked to 10 per cent in mid-September.

The turmoil forced the Fed to step in with tens of billions of dollars in emergency repo financing. It also began to purchase US$60 billion a month in T-bills to permanently lift reserves. The central bank has continued to backstop the repo market — in various amounts and over various terms — so it doesn’t seize up again. It has said it will continue its repo operations at least through April, but ultimately wants to step back from active involvement once reserves rise enough to ensure ample liquidity in the banking system.

Of course, one way Treasury could help is by keeping most of its cash in accounts of the nation’s commercial banks instead, as it did before the financial crisis. That would keep the Fed from having to manage the daily swings in Treasury’s cash cushion to prevent liquidity from drying up.

Treasury Secretary Steven Mnuchin isn’t convinced. In fact, he suggested such a shift could lead to even bigger financial-stability problems.

“If you’re a regulator, you wouldn’t want a major bank’s balance sheet to go up and down based upon what could be very, very large cash movements,” he told Bloomberg News in an interview last month. “It shouldn’t impact the market one way or another whether we put money at the Fed or at a bank.”

Fed Chairman Jerome Powell said in December that bank officials had yet to discuss the topic with their Treasury counterparts. Nevertheless, he added that “there may come a time when we talk about that.”

Even if there’s some kind of agreement between the two, some analysts say the best, and perhaps only, option for the Fed is to simply accept the fact that its repo operations have become a fact of life — and to stand ready to provide more cash whenever it’s needed.

“The Fed should just plan to do repos, beyond just as an emergency tool, as needed,” said Wrightson ICAP’s Lou Crandall.