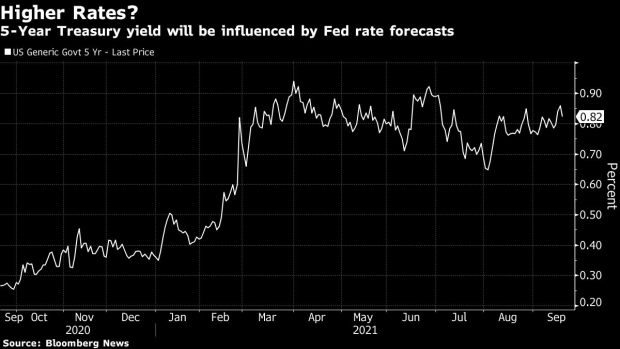 (Bloomberg) -- The Federal Reserve is expected to signal scaling back asset purchases later this year, with scrutiny also on forecasts that could reveal growing internal pressure to raise interest rates in 2022.

The Federal Open Market Committee is all but certain to hold rates near zero after a two-day policy meeting Wednesday and keep buying bonds at the current $120 billion monthly pace. The panel will release a statement at 2 p.m. Washington time plus updated quarterly estimates, including its dot plot of rate projections. Chair Jerome Powell will brief reporters 30 minutes later.

Seven of 18 officials in June penciled in liftoff in 2022, though the median estimate saw rates on hold into 2023.  With inflation forecasts likely to move higher this meeting, more policy makers could join the 2022 camp. Growing support for an earlier hike could undermine Powell’s message of patience while Covid-19 remains a threat, and his claim that tapering doesn’t start the countdown to liftoff.

“The tapering has been well telegraphed so it won’t surprise people,” said Roberto Perli, a partner at Cornerstone Macro LLC and former Fed economist. “The dots are more uncertain. It’s really easy to imagine the dots going up and almost impossible to imagine them going down.”

Powell’s characterization of the economy will also be parsed by the White House. His four-year term as chair ends in February. An overwhelming majority of economists expect President Joe Biden will keep him at the helm, though some progressives would like the White House to pick someone else. Biden’s decision is expected this fall.

This week’s market turmoil triggered by concerns over China’s real-estate sector probably came too late to affect the tone of the meeting, though tapering will be made conditional on the economy.

“The FOMC will leave itself an escape route, should the situation deteriorate,” Perli said.

Much of the meeting is likely to be focused on the timing, composition and pace of tapering. The Fed currently buys $80 billion in Treasuries and $40 billion in mortgage-backed securities every month. Officials have pledged to maintain bond buying until the economy shows “substantial further progress” on inflation and employment as it recovers from Covid-19.

Powell, in a late-August speech to the Fed’s annual Jackson Hole conference, said the FOMC could begin tapering this year after meeting the inflation half of that test, while the labor market had made “clear progress.” A version of those words could be included in the statement, said Aneta Markowska, chief U.S. financial economist at Jefferies LLC in New York.

“They might recycle the language which was in Powell’s Jackson Hole speech where he said on inflation the taper test has been met and we have made clear progress on the employment side,” she said. “It’s not quite as strong as substantial further progress. It would be a good indication that we are very close -- we are getting there.”

“The statement likely will communicate that inflation has met the criteria of “substantial progress” toward the Fed’s price objective and the labor market is expected to have made substantial improvement by the end of the year, two markers for the central bank to begin tightening policy.”

While the delta variant has caused some recent softness in the job market, the FOMC may choose to make relatively few changes in its statement, repeating the description that the economy continues to strengthen and that the surge in inflation is “transitory.”

Some regional Fed presidents, led by St. Louis Fed’s James Bullard and Dallas Fed’s Robert Kaplan, have argued for an early tapering. But they are not among FOMC voters this year, so it’s unlikely a delay to November or December would bring any dissents.

Most economists surveyed by Bloomberg expect the dot plot to continue to signal the first rate hike in 2023, though concerns about rising inflation could lead to a hawkish tilt.

More than a third of economists surveyed think the median for 2023 could increase from two hikes, an indication that the first hike would occur in the first half of the year. The forecasts will also include the first view of 2024, when three additional hikes are expected.

Inflation forecasts should also be notable for how the committee views prices, which have been boosted by supply disruptions as the economy reopens from the pandemic. Higher inflation forecasts could suggest a steeper rate hike path over time. Most economists expect the median forecast for price gains to rise to 3.8% this year, with 2.2% the following year.

“The dot plot could definitely be a thorn in the side for Powell since the regional Fed presidents could up their dots,” said Thomas Costerg, senior U.S. economist at Pictet Wealth Management in Geneva. “The regional Fed presidents are much less serene than Powell about the inflation risk. Behind the scenes I would expect quite a vibrant discussion as the gap between the regionals and the Board will be quite a big moat.”

Powell is likely to acknowledge the FOMC continued to discuss tapering, and could leave the impression the committee could move as soon as its next meeting, on Nov. 2-3. The chair is likely to be pressed on inflation following the most recent data, and whether Americans’ expectations are shifting, reflecting gains in recent consumer surveys.

He’s also likely to be asked about threats to financial stability from surging housing prices and from China’s real estate sector, which has prompted a global stocks rout.

Recent financial disclosures of stock trading last year by two Fed presidents are likely to also raise questions for Powell, who has announced a review of Fed policies.