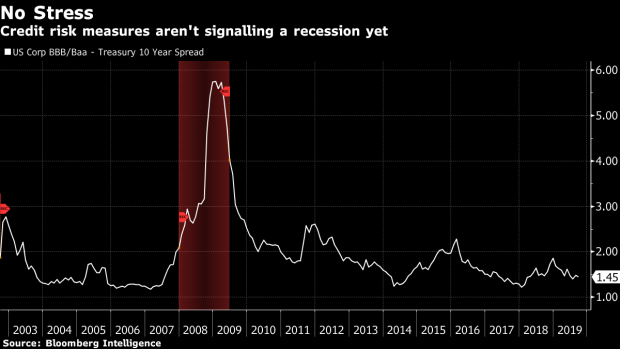 There are some Federal Reserve officials who live in the valley, and then there are those who live on the mountain.

The valley dwellers, a group that includes regional Fed presidents Thomas Barkin, Eric Rosengren and Esther George, are nestled in the domestic economy. From their vantage point, consumption is strong, unemployment is low and payroll growth still looks good.

Those officials on the mountain top, like New York Fed chief John Williams and Vice Chairman Richard Clarida, are looking beyond U.S. borders and see dark clouds. Global manufacturing is in recession. Trade disputes seem unlikely to be quickly resolved and that risks further dampening investment at home, with ominous implications for hiring.

So where does Chairman Jerome Powell stand? Probably in both places, which spells another quarter percentage point interest-rate cut at the Fed’s meeting this week with the option for further easing.

Powell pushed back hard on recession talk, saying on Sept. 6 that the most likely outlook for the economy is “favorable” with a strong labor market, moderate growth and gradually rising inflation. But he also underscored three “significant risks” -- slowing global growth, uncertainty around trade policy and too low inflation.

It’s a complicated message which says the U.S. economy could be just fine, or things could go badly wrong. That highlights policy and communication challenges faced by the Federal Open Market Committee as it gathers in Washington this week. Powell has to balance a divided committee in a time of high uncertainty.

Policy gradualism is usually the result. But his previous comments also suggest he’d like the economy to run hot, so long as inflation stays low.

That may result in a pronounced easing bias in the FOMC statement or his press conference, even though the need for compromise makes an aggressive half-point cut unlikely.

“I understand the no change camp, I could make that case,” says Laurence Meyer, a former Fed governor who now heads Monetary Policy Analytics, a Washington research firm. “But if you are in the risk management camp, you don’t take chances,” he said, which is why he expects them to cut again later this year.

Investors fully expect the FOMC to reduce the target range of its policy rate a quarter point to 1.75% to 2% at the end of its Sept. 17-18 meeting. Fed officials will also publish a new set of forecasts, and that’s where communication becomes difficult.

Those projections will be lowered because the Fed cut rates in July and is expected to do so again. But it wouldn’t be unreasonable to see the updated dot plot flat line from the end of 2019 for at least the next two years, economists said. That’s because “unchanged” is the default decision setting for a group that’s divided and uncertain.

However, Powell and the committee have room to emphasize in the statement or press conference that no matter what their forecasts say they will respond as needed to keep the expansion going.

“The outlook now is not bad. Employment growth has been pretty good, wages are growing faster than prices and that should support household spending,” said William English, a Yale University professor and former senior Fed economist. At the same time, trade negotiations with China could disappoint and the economy could be hit “with a big negative shock.”

The FOMC debate in September will therefore hinge on perceptions of the severity of the risks and how much policy insurance is needed.

For the valley dwellers, taking out more insurance looks unnecessary. Every cut brings policy closer to zero at a time when the economy doesn’t appear close to a recession, and may not be the right prescription anyway.

“Rate cuts are not going to affect the uncertainty issues that are weighing on domestic investment,” notes Lou Crandall, chief economist at Wrightson ICAP LLC.

For the mountaineers, the argument could be as simple as this: The Fed has missed its inflation target. Caution and measured policy action isn’t likely to heat up prices, especially when the dollar is appreciating following easing by the European Central Bank.

Powell has a reputation for listening to diverse views. But he also has his own framework for weighing policy. He’s said that the Fed’s mission is to sustain the expansion and has also discussed how a hot labor market helps people on lower incomes.

That suggests he won’t be satisfied with so-so growth with inflation below the Fed’s 2% target while people are still stuck on the fringes of the labor market.

The Fed’s preferred inflation barometer rose just 1.4% for the year ending July and monthly momentum in hiring has slowed. Private sector payrolls added an average of 145,000 jobs a month for the first eight months compared with 221,000 in the same period last year.

That’s a reason for Powell to persuade his colleagues to back more policy easing.

“It’s a demand issue not a labor supply issue,” and one that the Fed can affect, Dutta said.

To contact the reporter on this story: Craig Torres in Washington at ctorres3@bloomberg.net

To contact the editors responsible for this story: Alister Bull at abull7@bloomberg.net, Sarah McGregor