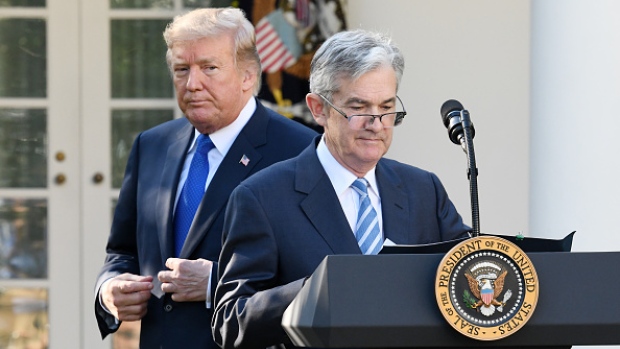 Jerome Powell, governor of the U.S. Federal Reserve and President Donald Trump's nominee as chairman of the Federal Reserve, right, pauses while speaking while Trump listens during a nomination announcement in the Rose Garden of the White House in Washington, D.C., Nov. 2, 2017 , Bloomberg

The Federal Reserve’s attempt to rein back interest-rate expectations is sending money scattering across the Treasuries curve.

Investors that flocked to short maturities to take advantage of more central bank easing are dispersing with their conviction shaken as the Fed takes a firmer stance on the need for proof of a slowdown to justify further action. That led to the worst streak of withdrawals in almost five years from the largest ultra-short ETF; the US$22 billion BlackRock Inc. fund lost US$1.9 billion to outflows over the last four trading days, while funds holding longer-duration securities swelled.

Confusion is understandable. The U.S.-China trade saga keeps lurching from glimmers of progress to fresh rounds of tariffs. A slump in global manufacturing threatens to push the world’s largest economies to the brink of recession, yet U.S. services remain resilient. And Chairman Jerome Powell is still calling rate cuts “insurance,” despite delivering another quarter-point reduction this month. No wonder investors have been rethinking their bets on easing.

“The data has been going back and forth,” said BNP Paribas SA strategist Timothy High. “People got a little whipsawed. For us, we continue to think that there’s value in owning the long-end of the curve.”

Indeed, longer-dated bonds are enjoying a renaissance on the basis that, amid all the uncertainty, the growth outlook has undeniably weakened. Among the biggest beneficiaries was a BlackRock fund that owns securities maturing in seven-to-10 years, as well as a 20-year bond fund that saw its biggest inflow since April this week.

The deteriorating economy, and a suspicion the Fed will move too slowly to prevent a downturn, has flattened the U.S. yield curve this month, with the gap between the two- and 10-year yields shrinking to just above 3 basis points, from a peak of around 10 basis points. An inverted curve, as existed intermittently last month, has preceded every recession since the 1960s.