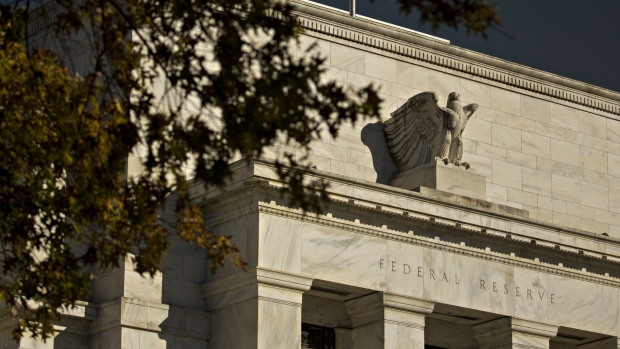 (Bloomberg) -- Regulators on both sides of the Atlantic have spent the better part of three years trying to kill the London interbank offered rate. Now, they’re looking to it once again to underpin hundreds of billions of dollars in loans as they seek to rescue their economies.

U.S. policy makers last week changed tack and turned to Libor as the benchmark for their $600 billion Main Street Lending Program, which will buy debt from potentially hundreds of companies. The move came a day after U.K. officials granted banks a six-month extension to keep issuing loans tied to the beleaguered reference rate, which is supposed to be phased out by the end of 2021.

The timetable to do away with the benchmark linked to trillions of dollars of financial assets appears increasingly at risk as central bankers lean on Libor to help expedite their massive stimulus efforts. As they lend legitimacy to the much-maligned rate, some market watchers say it’s highlighting the shortcomings of replacements, while others note it could ultimately lead to a more difficult transition down the road.

“The crisis does make it tougher and it will put a lot more time pressure on meeting the deadline,” said Darrell Duffie, a finance professor at Stanford University who has written extensively on Libor. He called the Fed’s decision, while necessary, “very unfortunate” and a missed opportunity to pivot away from the benchmark, adding that it’s a sign that U.S. lenders “were not getting ready” for the transition.

For their part, the banks planning to participate in the facility argue that rapidly implementing new systems to issue loans based on the Fed’s preferred replacement -- the Secured Overnight Financing Rate -- would have diverted resources from other challenges related to the Covid-19 pandemic.

The switch from SOFR to Libor was a “practical consideration, because these programs are designed to quickly disperse funds in unprecedented environments to those in need,” Tom Wipf, chairman of the Fed-backed Alternative Reference Rates Committee overseeing the Libor transition in the U.S., said in a statement last week.

Yet some say the reversal shines a light on critical deficiencies in SOFR.

These include the lack of a term structure, absence of a credit component and susceptibility to periodic volatility in the market for repurchase agreements that determine the benchmark’s setting.

“SOFR alone would be a terrible lending index,” said John Coleman, senior managing director of the fixed-income group at R.J. O’Brien & Associates in Chicago. “Libor is terrible because it acts in a dysfunctional way because nothing trades in it. What used to be good isn’t really working and what’s supposed to be replacing it isn’t really working.”

The Fed’s decision to rely on Libor follows a similar move in the U.K., where policy makers are leaning on the rate to help pump emergency funds to businesses ravaged by the outbreak. Banks can now issue Libor-linked loans through the end of March 2021 after the Financial Conduct Authority pushed back the drop dead date from the end of September.

“People are significantly distracted with things like getting their heads around emergency funding schemes to keep businesses afloat,” said Paul Mullen, a partner at law firm Hogan Lovells in London. That’s “diverting resources away from thinking about Libor transition.”

As the focus switches to whether regulators will ultimately push back the 2021 deadline, both U.S. and U.K. officials have remained steadfast. Still, they acknowledge that certain near-term goals and milestones will undoubtedly be missed.

That could make ditching the ubiquitous reference rate that much harder. Loans via the Fed’s Main Street Lending facility will have a four-year maturity, taking them well beyond the 2021 cut-off point.

While policy makers are reminding lenders and borrowers to include fallback language in new Libor-based contracts, the decision will ultimately mean billions of dollars of additional debt that will need to be transitioned to a new benchmark.

“The overall effect will be to create a large volume of new Libor-linked products, potentially exposing all parties participating in the loans to the risks inherent in renegotiating the switch,” said Rupert Lewis, head of banking litigation at Herbert Smith Freehills LLP in London.