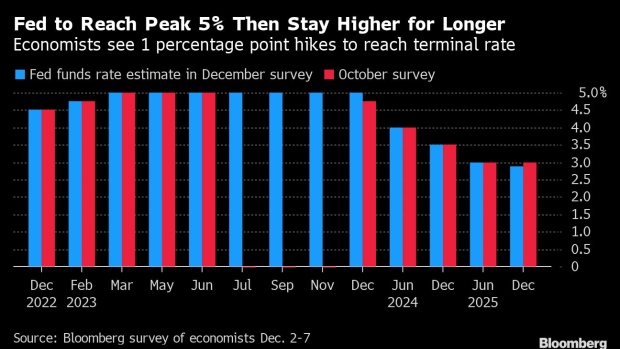 (Bloomberg) -- The Federal Reserve is set to disappoint Wall Street as it keeps rates at their peak throughout 2023, dashing hopes markets have priced in for rate cuts in the second half and making a recession very likely.

That’s the forecast of economists surveyed by Bloomberg ahead of a decision and forecasts due from the Federal Open Market Committee on Wednesday. Policymakers will raise rates by 50 basis points next week, following four consecutive 75 basis-point hikes, and by quarter points at the following two meetings, the survey found. Policymakers will announce their decision and forecasts at 2 p.m. in Washington.

The FOMC’s median projection is expected to show the policy benchmark peaking at 4.9% in 2023 — reflecting a 4.75%-5% target range — compared to 4.6% seen in September. That would deliver a hawkish surprise to investors, who currently bet that rates will be cut by a half percentage point in the second half of next year, though they too see rates peaking around 4.9%.

Chair Jerome Powell has said he’s willing for the economy to suffer some pain to lower inflation near 40-year highs and that should be a bit more visible in the new forecast.

The Fed’s summary of economic projections are likely to show that policy makers are looking for weaker US growth and slightly higher unemployment than they were expecting in September. They may downgrade 2023 growth estimates to 0.8% compared to 1.2% in September while seeing unemployment rising to 4.6%. The US jobless rate stood at 3.7% last month.

“The Fed has signaled the terminal rate will likely be around 5% — we think an upper bound of 5% — reached in early 2023. To get there, the central bank will likely raise rates by 50 basis points at its December 2022 meeting, followed by two more 25-bp hikes in 2023. We then see it holding at 5% throughout the  year.”

Data released on Friday showed US short-term inflation expectations unexpectedly declined to the lowest level in more than a year while producer prices rose in November by more than forecast.

“The resilience of consumer spending and the labor market places upward pressure on inflation and as a result heightens the upside risks to our terminal rate forecast” of 5%-5.25%, said Kathy Bostjancic, chief economist of Nationwide Life Insurance Co.

Fewer than half of the economists are looking for rate cuts in 2023. Those who do are looking for the unemployment rate to jump to 5% from 3.7%, and most see rising joblessness and recession as the major cause of the reversal.

Powell has argued that higher rates are necessary for longer, even amid economic weakness, to push down prices pressures and that he doesn’t want to err by relenting prematurely in the inflation battle. That’s the mistake made back in the 1970s and early 1980s that fostered the persistently high inflation which led the Fed to inflict a severe recession to bring them back down.

The Fed chair on Nov. 30 said rate hikes could be moderated at the upcoming meeting, signaling the downshift to a half-point move, but that is “far less significant” than the peak that rates achieve and how long they stay there.

“This will be a very challenging period for policymakers at all levels,” said Hugh Johnson, chairman of Hugh Johnson Economics LLC. While the Fed clearly desires to hold rates at the peak throughout the year, “These decisions are  quite clearly data dependent and will be challenged if, as we  suspect, the economy contracts and inflation rates continue to moderate through the first half of 2023.”

The committee in its forecasts is likely to see inflation as being somewhat more elevated than its September view at 5.6% in 2022 and 2.9% next year. The Fed targets 2% inflation measured by the personal consumption expenditures price index, which rose by less than expected in October, though it has been higher and more persistent than forecast for much of the year.

While Fed officials see a narrow path for a soft landing, a growing consensus of 81% of economists see a US recession as likely. Most of the rest see a hard landing with a period of contraction or zero growth that falls just short of a formally declared downturn. A global recession is also seen as likely by 76% of the economists.

There’s “a high risk of monetary-policy mistake,” said Thomas Costerg, senior US economist at Pictet Wealth Management. “Taking into account the lags, while explicit in the Fed’s statement, seem still to be taking a back seat when it comes to actual decision-making. The idea of a soft landing is getting less and less probable.”

The FOMC statement is expected to retain its language giving guidance on interest rates that pledges ongoing increases to a ‘’sufficiently restrictive” level to return inflation to target. That was tweaked at the last meeting in early November to acknowledge the effect of cumulative tightening and the time lags with which monetary policy impacts the real economy.

One quarter of economists expect a dissent at the meeting, which would be the third of 2022. Kansas City Fed President Esther George dissented in June in favor of a smaller hike, warning that too-abrupt changes in interest rates could undermine the ability of the Fed to achieve its planned rate path. St. Louis Fed President James Bullard dissented in March as a hawk.

(Updates with PPI and UMich data in paragraph eight.)