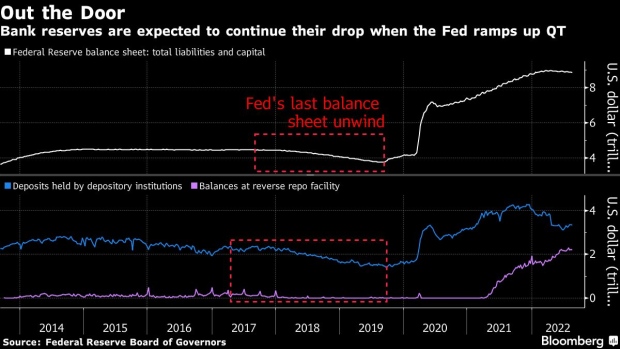 The Marriner S. Eccles Federal Reserve building in Washington, D.C., US, on Wednesday, July 6, 2022. The Federal Reserve will unveil details of what policy makers debated last month that may shed light on how they view the near-term path for interest rates amid surging inflation and signs of a slowing economy. Photographer: Al Drago/Bloomberg , Bloomberg

(Bloomberg) -- The Federal Reserve looks to be paying closer attention to a potential pinch-point that rankled dollar funding markets almost three years ago and could at some stage become a catalyst for ending early officials’ plans to shrink the US central bank’s expanded balance sheet.

Yields offered by money-market funds -- vehicles that invest in a variety of cash-like instruments ranging from Treasury bills to repurchase agreements, as well as a key facility provided by the Fed itself -- are now “well above” rates offered by banks, monetary authority staff told policy makers at the latest meeting of the Federal Open Market Committee.

That’s creating scope for cash to flow into these types of funds and out of the banking sector, which could hasten the speed at which bank reserves dwindle to an uncomfortably low level. And that in turn could be a trigger for ending so-called quantitative tightening, as the balance-sheet reduction is known, just as it was back in 2019 when the Fed was last engaged in this process.

The existence of the yield gap is, of course, widely known. Money market funds generally shift more or less in line with wholesale markets, but bank rates tend to be a bit more sticky. So with the Fed having raised rates at such a rapid clip -- 2.25 percentage points since the start of this year -- the potential differences are quite substantial. So the differential itself is not a surprise. But the fact that policy makers are being briefed on it underscores that this is an issue the Fed is keenly focused on as the size of its System Open Market Account holdings dwindle.

Bank reserves were already declining even before the Fed started unwinding its nearly $9 trillion balance sheet, and it’s not surprising that QT might exacerbate that trend, given money funds tend to be quicker to pass along interest-rate hikes to investors than banks. Yet the consensus is growing that the extra liquidity QT is draining seems to be coming more out of bank reserves than out of money funds (and in turn out of the Fed reverse repo facility where more than $2 trillion of their assets are presently parked on a daily basis).

For funding markets, the key issue is that a faster-than-anticipated decline in bank deposits means that reserves become more scarce. If that gets to a problematic point for banks -- below the lowest comfortable level, in industry parlance -- that can send some scrambling for funds, pushing overnight rates dramatically higher and creating discord within the market. And the upshot of that would likely be that the Fed needs to halt its QT program, much like it did last time around.

The gap between what rates investors can get at banks and what money funds offer “will be huge for determining the path of System Open Market Account liabilities, and ultimate end date for QT, among other things,” said Tim Wessel, a macro strategist at Deutsche Bank AG. “It has implications for how fast reserves will drain versus the reverse repo facility, and therefore, how long they can run QT, and how large RRP balances will be at the end of QT.”

Reserves parked at the Fed have declined to about $3.3 trillion after peaking at $4.3 trillion in early December. The central bank’s senior financial officers’ survey released last month showed a majority of respondents from domestic banks said they expect reserve balances will decrease as a share of their total assets through the end of the year. Just where the ideal level of reserves might be, though, is almost impossible to say. Back in 2019, the estimates of where the system’s pain threshold might be were off the mark, and there’s considerable difference of opinion right now.

One saving grace this time around is that there are now additional mechanisms in place that could help cushion any shock from reserves dropping too low. For example, the standing repo facility -- which is scarcely being used at all for now -- allows banks to access quick cash in return for putting up high-quality debt as collateral without having to actually sell anything.

Even without any significant market-moving ructions though, or the threat of them, a disproportionate withdrawal of liquidity from banks rather than money funds could still in effect prevent significant shrinkage of the Fed balance sheet. That’s because such a huge chunk of money-fund holdings at the moment are simply sitting at the Fed’s RRP each evening. The Fed needs to be prepared for potential circumstances where that pile gets even bigger than it already is, which in turn could limit how small the central bank’s own collateral pile -- mostly Treasuries and mortgage bonds -- is able to get.

In the meantime, though, the Fed is proceeding with ramping up its runoff plan, taking it to a monthly clip of $95 billion in September. At that pace, the balance sheet could shrink to around $6.5 trillion by the first quarter of 2025, but the chorus of those doubting it will get anywhere near that is beginning to grow louder and concerns around bank reserve levels simply add to the risk that it could indeed all come to an end as soon as next year.