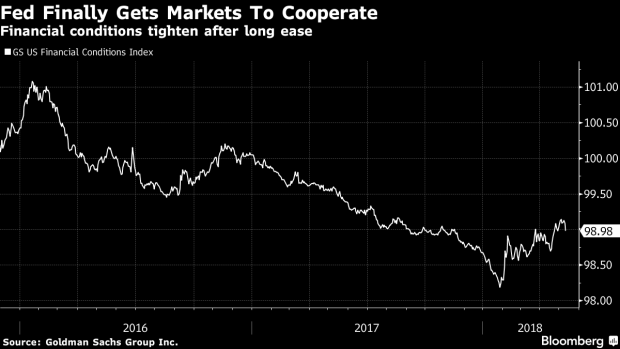 (Bloomberg) -- The Federal Reserve is finally succeeding in tightening financial conditions, more than two years after it began raising interest rates. The only trouble is that the economic impact is being felt more abroad than in the U.S.

Rising Treasury bond yields and a resurgent U.S. currency have shaken emerging markets as investors have reassessed the creditworthiness of nations that loaded up on dollar-denominated debt. The U.S. economy, in contrast, looks set to power ahead, with economists forecasting average annual growth of around 3 percent in the final three quarters of this year, helped by a big dollop of fiscal stimulus.

“It’s a bit like that old saying: The U.S. sneezes and the rest of the world catches a cold,” said Ethan Harris, head of global economics research at Bank of America Merrill Lynch in New York.

The emerging market jitters aren’t expected to deter Fed Chairman Jerome Powell and his colleagues from delivering their second interest rate increase of 2018 when they meet on June 12-13. What Fed watchers instead will focus on is how many additional hikes beyond that policy makers pencil in for the rest of the year -- one or two -- with JPMorgan Chase & Co. chief U.S. economist Michael Feroli betting it will be the latter.

Investors could get some insight into the central bank’s future strategy when vice chairman nominee Richard Clarida testifies to Congress on Tuesday. Barring any missteps, the Pacific Investment Management Co. adviser is expected to win Senate confirmation for the post.

Ever since the Fed began raising rates in December 2015, officials have been anticipating that financial conditions would tighten in response and so aid their efforts to keep the economy on an even keel. Instead, for much of the period, stock prices rose, credit spreads narrowed and the dollar fell.

It’s only in the last few months that has started to change, as rising inflation and the Fed’s repeated rate increases have begun to curb investors’ risk appetite. Policy makers “are getting what they want,” Feroli said. “Some things are starting to move in the direction of regulating the pace of growth.”

The tightening of financial conditions though has triggered turbulence in emerging markets, especially in countries whose home-grown problems left them exposed to sudden shifts in investor sentiment. Argentina is in urgent discussions with the International Monetary Fund about a credit line to try to stop a rout of its currency while Turkey faces a crisis of confidence amid conflicting signals about its policy intentions.

The investor unease prompted the Institute of International Finance last week to reduce its forecast for capital inflows into emerging markets this year by $43 billion to $1.2 trillion -- in line with last year’s outturn.

“Swings in investor sentiment have become more abrupt and bigger in scale, with uncertainty over the trajectory of the U.S. dollar and U.S. rates resulting in mini ‘boom-bust’ cycles for portfolio flows,” the Washington-based institute said in its report.

So far, the fallout hasn’t been nearly as bad as what occurred during the so-called taper tantrum of 2013, when a suggestion by then Fed Chairman Ben Bernanke that the central bank might scale back its bond buying triggered a collapse in emerging markets.

Conventional wisdom used to be that a strong dollar was good for most other countries because it made their exports more competitive in the world’s largest market. Yet a surge in dollar-denominated credit to emerging markets -- it grew 10 percent last year to $3.7 trillion according to the Bank for International Settlements -- means that those borrowers may face financing difficulties if the U.S. currency appreciates.

“When the dollar strengthens, cross-border bank credit goes down,” said Valentina Bruno, an associate professor at American University in Washington, who has researched the topic, including with BIS economists.

A Fed study released last week found that the foreign spillovers from higher U.S. interest rates are large and on average almost as big as the effects on the U.S.

The dollar is set for further gains, despite easing a bit at the end of last week, according to HSBC Securities Inc. chief U.S. economist Kevin Logan, as the Fed pushes ahead with rate hikes and the European Central Bank and Bank of Japan hesitate to scale back stimulus due to lagging inflation.

Logan forecast that the dollar’s ongoing strength will help convince the Fed to end its rate-rising campaign next March after three additional increases. That would leave the central bank’s federal funds rate target at 2.25 to 2.5 percent.

Atlanta Fed President Raphael Bostic has suggested that the central bank take a pause from hiking after the rate reaches its so-called neutral level, which he posited was in the 2.25 to 2.75 percent range.

That said, nearly all of Federal Open Market Committee participants expect that the central bank will eventually have to raise rates above the neutral level so as to restrict economic growth. The median projection of policy makers released by the central bank in March is for the funds rate to reach 3.4 percent by the end of 2020.

Of course, that’s contingent on the economy not being knocked off course by a sudden shock, be it geopolitical or otherwise.

Powell argued last week that emerging markets are in better shape than in the past and should be able to weather further rate increases by the Fed because those moves are generally anticipated by investors.

“Market participants’ expectations for policy seem reasonably well aligned with policy makers’ expectations,” he told a May 8 conference in Zurich. “There is good reason to think that the normalization of monetary policy in advanced economies should continue to prove manageable” for emerging markets.

To contact the reporter on this story: Rich Miller in Washington at rmiller28@bloomberg.net.

To contact the editors responsible for this story: Brendan Murray at brmurray@bloomberg.net, Alister Bull, Randall Woods