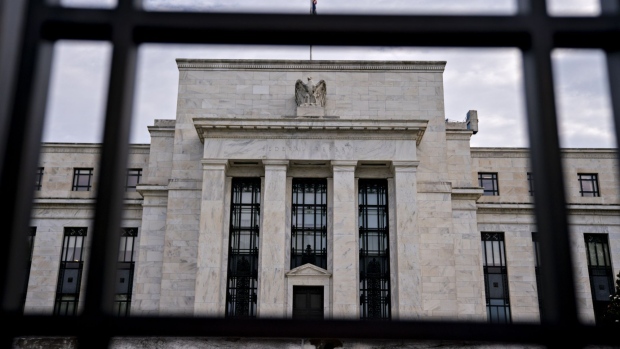 Federal Reserve officials stressed that risks to the U.S. economy remained elevated as they agreed to put interest rates on hold following their third cut this year.

Many participants saw downside risks to the economic outlook as elevated, “further underscoring the case for a rate cut at this meeting,’’ according to minutes of the Oct. 29-30 Federal Open Market Committee session released Wednesday in Washington.

“In particular, risks to the outlook associated with global economic growth and international trade were still seen as significant,’’ the minutes said. “The risk that a global growth slowdown would further weigh on the domestic economy remained prominent.”

The FOMC lowered rates by a quarter percentage point at its October gathering, the third such move in three months. At his press conference following the announcement, Chairman Jerome Powell said monetary policy was “in a good place,’’ signaling rates would stay on hold until officials saw a “material’’ change in their economic outlook.

“There is not a critical mass of committee members willing to cut rates, at least at this point,’’ Wells Fargo & Co. economist Jay Bryson said. “They still have a bias to ease, but not any time soon. They continue to talk about downside risks and inflation being below their 2 per cent target and inflation expectations being low.’’

The 10-year benchmark yield edged slightly lower to 1.73 per cent in afternoon New York trading following the release of the minutes, while the dollar was little changed. Traders added slightly to their positioning for a rate cut next year, with futures markets now fully priced for a quarter-point move by early in the third quarter.

The minutes showed “most participants” judged policy would be well calibrated after the Oct. 30 cut and “likely would remain so as long as incoming information about the economy did not result in a material reassessment of the economic outlook.”

“Some” officials, however, had preferred to leave rates steady at the meeting because their forecasts for the economy remained favorable. A “few” also said cutting rates would raise financial stability risks.

At the gathering, a couple of participants said the committee should reinforce its statement with additional communications indicating that another rate reduction “was unlikely in the near term unless incoming information was consistent with a significant slowdown in the pace of economic activity,” the minutes showed.

Kansas City Fed President Esther George and Boston’s Eric Rosengren voted against the rate cut, as they had in July and September, preferring to keep rates steady. In addition, the minutes showed a couple of participants who backed a cut said the decision was “a close call.”

Central bankers used part of their meeting to discuss an ongoing review of their policy strategy and tools, including an examination of negative interest rates which have been used in Japan and Europe but were shunned by the Fed during the financial crisis.

Time has not improved their assessment of its benefits, indicating a high bar to deploying them in the U.S., though they took pains to not rule them out under any circumstances.

“All participants judged that negative interest rates currently did not appear to be an attractive monetary policy tool in the United States,” the minutes said, adding a list of shortcomings with the strategy including the evidence being mixed on their benefits and potential adverse effects on U.S. financial stability.

President Donald Trump, who’s relentlessly attacked the Fed claiming its policy is too tight, met with Powell on Monday and said he “protested” rates that he considers too high relative to other developed countries. Trump has previously said that the Fed’s failure to deploy negative rates was hurting the U.S.

The FOMC also wrestled with the option of introducing a permanent program aimed at providing liquidity to overnight funding markets, a so-called standing repo facility, though did not make a decision.

After going over the pros and cons of creating a standing repo, many officials argued that there might be little need for once ample banks reserves had been restored, though it could potentially be a “useful backstop.”

A sudden shortage of liquidity in mid-September caused overnight repurchase rates to spike and briefly pushed the benchmark federal funds rate out of the Fed’s target range. The central bank responded by injecting cash into the repo market to relieve strains and purchasing Treasury bills at an initial pace of US$60 billion a month to ensure ample reserves.

Fed policy makers reiterated at the last meeting that they would keep up Treasury bill purchases into the second quarter. The minutes showed that all participants supported the plan.

The minutes also contained an account of an Oct. 4 videoconference on money markets, which was announced on Oct. 11. Most participants preferred not to wait until the Oct. 29-30 meeting to make a statement on the planned bill purchases and repo operations, the minutes showed, while highlighting an internal debate on the scale of the buying.

“Many participants supported a relatively rapid pace to boost reserve levels quickly, while others supported a more moderate pace of purchases,” the minutes said.