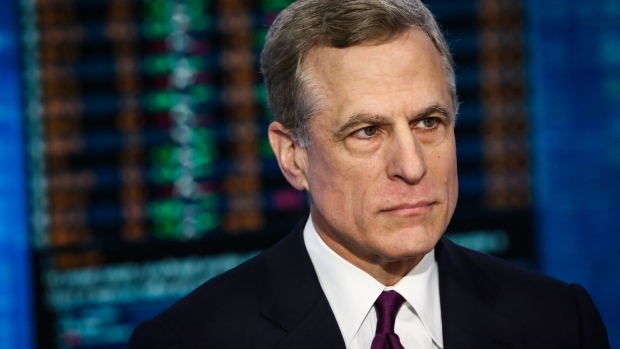 (Bloomberg) -- The Federal Reserve’s low interest rates, the perception that there is a high bar to future increases and expansion of its balance sheet are helping to lift asset prices, said Federal Reserve Bank of Dallas President Robert Kaplan.

“All three of those actions are contributing to elevated risk-asset valuations,” Kaplan told Michael McKee in an interview Wednesday on Bloomberg Television. “And I think we ought to be sensitive to that.”

Kaplan’s view contrasts with many Fed officials, who insist the Fed’s resumption of purchases of assets is a technical change that has little or no effect on the value of asset prices. Chairman Jerome Powell has repeatedly referred to the plan to buy Treasury bills at an initial monthly pace of $60 billion as “not QE,” or quantitative easing, describing it a response to turmoil in money markets.

“My own view is it’s having some effect on risk assets,” Kaplan said. “It’s a derivative of QE when we buy bills and we inject more liquidity; it affects risk assets. This is why I say growth in the balance sheet is not free. There is a cost to it.”

Kaplan, a voter this year on the rate-setting Federal Open Market Committee, called for the Fed to be cautious with its expansion in the balance sheet.

“I think we’ve done what we need to do up until now. But I think it’s very important that we come up with a plan and communicate a plan for winding this down and tempering balance sheet growth.”

Kaplan said this year’s election wouldn’t affect his support or opposition to future rate changes, adding he is not currently forecasting any policy change but “we’ve got to do what’s right for the U.S. economy.”

Fed officials left interest rates unchanged last month following three cuts in 2019, with most officials signaling they favored keeping them on hold through 2020 provided the economy stayed on track.

Investors see almost no chance of a rate cut in the next six months, according to pricing in federal funds futures contracts.

Kaplan said he saw consumer spending supporting U.S. growth this year and trade agreements reducing uncertainty for businesses, potentially helping business spending. Economic growth has slowed but remains respectable with unemployment at a 50-year low, though inflation has been under the central bank’s 2% target for most of the last seven years. The most recent reading of its preferred gauge, minus food and energy prices, showed just a 1.6% gain in the 12 months through November.

Minutes of the Dec. 10-11 meeting released Jan. 3 showed officials still see some downside risks to their outlook for continued growth and were prepared to move rates up or down if there was a “material” change in their forecasts.

To contact the editors responsible for this story: Margaret Collins at mcollins45@bloomberg.net, Alister Bull, Vince Golle