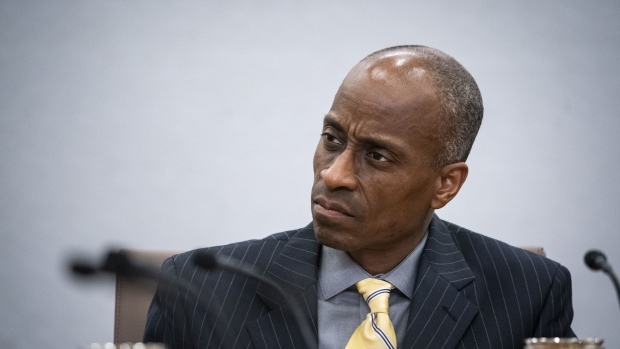 Philip Jefferson, governor of the US Federal Reserve, during a Fed Listens event in Washington, D.C., US, on Friday, Sept. 23, 2022. Federal Reserve officials this week gave their clearest signal yet that they're willing to tolerate a recession as the necessary trade-off for regaining control of inflation. , Bloomberg

Their remarks Tuesday reinforced the message from other officials at the US central bank that rates will continue to rise following 75 basis-point increases at their last three meetings with more hikes forecast ahead.

“We have acted boldly to address rising inflation, and we are committed to taking the further steps necessary,” Jefferson said in Atlanta in his first speech since joining the US central bank as a governor in May. “My colleagues and I are resolute that we will bring inflation back down to 2%.”

The median projection of the 19 officials last month was for interest rates to rise to 4.4% by the end of the year from a current target range of 3% to 3.25%.

Speaking at a conference on technology disruption at the Atlanta Fed, Jefferson said inflation was “elevated, and this is the problem that concerns me most.” He said he was worried that high prices could feed into the public’s expectations, even with recent declines in gas prices.

“While oil and gasoline prices have come down in recent months, I am concerned that fluctuations in prices of the goods to which people pay the most attention, like food and housing, will affect expectations of future inflation,” Jefferson said.

The Fed governor described the US labor market as ‘’very tight,” citing a high level of quits and job openings. Job openings plummeted in August by the most since early in the pandemic, the Labor Department reported earlier Tuesday. There are some 1.7 jobs for every unemployed person, down from about 2 in July.

“In a market with more job openings than workers, the competition to fill vacancies is leading to rapid wage gains now, and the resulting salary compression may lead to further upward wage pressures in the future,” he said.

Daly, speaking in an interview on CNN, said that ensuring high inflation doesn’t become entrenched into the future price expectations of American households “will require that we follow through on our commitments to bring inflation down, which does mean further rate hikes and holding those restrictive policies in place until we are truly done with bringing inflation back to target.”

Even so, she said that officials could achieve this without crashing the US economy into a severe recession.

“I really see us being able to slow the economy, slow growth, slow the labor market. Yes, there will be an increase in unemployment, but I think the 4.5% range is the right range,” she said.

US unemployment was 3.7% in August and is forecast to remain at that level last month in fresh government data that will be released on Friday, according to economists surveyed by Bloomberg.