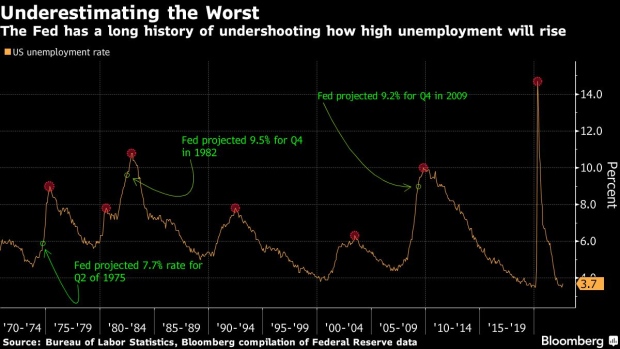 Job seekers stand in a line for an interview at the San Francisco Career Fair & Job Fair in Burlingame, California, U.S., on Thursday, March 14, 2019. The Department of Labor is scheduled to release initial jobless claims figures on March 21. , Bloomberg

The Federal Reserve’s forecasting track record over the past half-century suggests it may be overly optimistic when it predicts the US unemployment rate will rise in the coming year to 4.4% and hold there.

Fed officials have failed to correctly predict how high joblessness would increase during, or in the wake of, almost every recession over the past 50 years. In three cases -- 1975, 1982 and 2009 -- unemployment surpassed the central bank’s near-term projections by about a percentage point or more.

The undershoot happened time and again, partly because economic models have a hard time predicting how rapidly activity downshifts in a recession.

And in the midst of the financial crisis in March 2009, the central bank anticipated the rate would increase to 9.2% by the end of the year. By October, it had surged to 10%.

The historical forecasts are derived from staff documents available to the public. The staff since 1995 has shown policy makers scenarios on the unemployment rate beyond their baseline. For example, in March 2009, a scenario that contemplated even worse financial strains showed the rate peaking around 11%.

“Recessions are famously difficult to predict,” said David Wilcox, director of US economic research at Bloomberg Economics and former director of the Federal Reserve Board’s Division of Research and Statistics. “When the economy starts to weaken, a different dynamic takes over.”

So far, the labor market has remained robust even after the Fed began to aggressively increase interest rates and economic activity slowed.

And Friday’s monthly jobs report is expected to show that employers added 260,000 payrolls last month, based on the median estimate from economists. The unemployment rate is seen holding at 3.7%, which is just above a five-decade low.

The Fed expects the jobless rate to rise by 0.7 percentage point from that level to 4.4% by the end of next year, and stay there in 2024, based on the median forecast of the 12 Fed bank presidents and seven governors. For comparison, 4.4% was the average rate seen in the five years preceding the Covid-19 pandemic, at a time when the economy was expanding.

Claudia Sahm, founder of Sahm Consulting and a former Fed economist, emphasized how many downturns look similar in the beginning. Sometimes it’s “hard to imagine how bad it could be,” she said.

Fed policy makers have repeatedly emphasized the need for softening labor conditions to meet inflation goals, and warned about the economic hardship that will accompany rapidly rising interest rates.

Fed Chair Jerome Powell said neglecting to get inflation under control would be even worse for everyday Americans, and his Fed colleagues have shown similar resolve. When Cleveland Fed President Loretta Mester was asked if rising recession risk amid stubborn inflation would steady her hand in raising interest rates, her answer was simply “no.”

Fed policy makers will have little power to rein in the unemployment rate quickly if joblessness rises more rapidly than they expect, said William Spriggs, chief economist at the AFL-CIO, the largest US labor federation.

They don’t have a “magic control,” Spriggs said. “Once you get the unemployment rate up, even them lowering interest rates does not make the economy come back.”

Still, while Fed’s projected unemployment rate path would be unusual, it’s not unthinkable in a recovery that’s been nothing but.

The economy roared back much faster than expected from the pandemic. Now, despite significant softening in economic activity, layoffs remain low and many businesses are still struggling to fill positions.

That tight labor market -- fueled in part by the fact that participation, while improved, hasn’t returned to pre-pandemic levels -- has been a key driver of wage growth through much of the past two years. It’s also the foundation of why many economists, including at the Fed, believe so-called labor hoarding will keep a lid on unemployment.

Because businesses have had to scramble to attract and retain talent, the assumption is that employers will be reluctant to cut workers loose, especially if they anticipate that the economic slowdown will be shallow or likely to pass quickly.

Richmond Fed President Thomas Barkin last week gave the example of a hotel where staffing is about 80% of what’s needed. The lounge is closed, and perhaps housekeeping has been reduced to every other day. The establishment is getting by, but if demand falls by 10%, it’s not clear there will be staff cuts, he said.

“If you’ve struggled to fill positions for the last year, your desire to just lay off a bunch of housekeepers as a hotel is not high,” Barkin said.

Data out Tuesday also suggested a potential path to softening labor market conditions without an ensuing spike in unemployment. US job openings plummeted in August by the most since early in the pandemic, pointing to a moderation in demand, but without a corresponding surge in layoffs.

The unemployment path projected by the Fed would certainly make it a “very strange recession,” Sahm said.

But “if we were going to have the weirdest recession ever, it would be now,” she said.