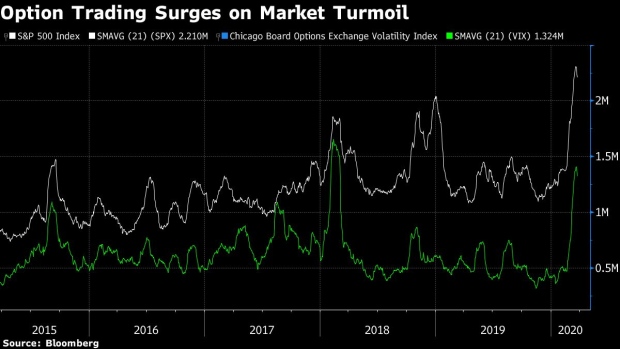 (Bloomberg) -- Amid the coronavirus outbreak, the options market has been a crucial tool for investors seeking to protect themselves from the wild swings of stock prices. Now, just as trading is surging, exchanges are warning that regulations could sideline banks that keep the market functioning.

At issue are capital rules that determine how much risk Wall Street banks, which clear options trades, can take on behalf of their clients. Top officials at Cboe Global Markets Inc., Nasdaq Inc. and the New York Stock Exchange told the Federal Reserve last week that a jump in buying and selling was putting market makers perilously close to hitting their bank-imposed limits. The exchanges urged the Fed to give banks more leeway to handle the increased demand, according to a copy of a letter reviewed by Bloomberg.

Investors rely on options to hedge against declines in equity prices and to bet on broad market moves, such as a surge or plunge for the S&P 500. The products have been embraced at a time when coronavirus is triggering significant angst about the state of the global economy, and as a result, roller-coaster trading days.

“They become the go-to-instrument when markets become volatile and investors and market participants seek to manage their risk exposure,” said Andy Nybo, a managing director at Burton-Taylor International Consulting, which provides analysis to financial firms.

Banks play a pivotal role in the options market because they settle transactions for market makers -- the professional traders who sit on the other side of wagers made by fund managers and mom-and-pop investors. But banks may resist clearing trades if it means having to set aside more capital. Should they pull back, it would effectively put a cap on market makers’ portfolios. Cboe, Nasdaq and the NYSE say that is at risk of happening just as volatility is hitting records and investors are desperate to trade options.

“It is critical to extend immediate relief,” the exchanges said in the March 18 letter to Fed Vice Chairman For Supervision Randal Quarles and other officials. “We implore the Board to exercise its considerable authority to grant relief to expand clearing capacity during a time of extraordinary market stress.”

In a statement, NYSE said the exchanges’ want the Fed to take action before the end of the month so that market participants can benefit from increased liquidity and price discovery. Cboe and Nasdaq declined to comment on the request to the Fed.

A Fed spokesman said Quarles received the letter, but the agency had no further comment.

U.S. regulators have acknowledged that the way they require banks to calculate risk from derivatives clients has shortcomings. The process is known as the current exposure methodology, or CEM. In November, U.S. officials announced they were shifting to a different measure known as the standardized approach for counter-party credit risk, or SA-CCR.

That revision should lead to reduced capital requirements for banks’ derivatives contracts. Supporters also say it will improve market liquidity.

But SA-CCR isn’t supposed to start going live until April, and it will probably take much longer before Wall Street applies it to options clearing. That’s because banks are required to use the new methodology across their firms, meaning it will likely take time to hit each individual business line.

Cboe, Nasdaq and NYSE want the Fed to speed things up by letting banks start using SA-CCR this month on options contracts or by applying a different fix that enables lenders to overhaul their risk calculations.

The timing is important because March 31 marks both the end of the month and the first quarter. Banks will likely make decisions before the month closes about how much clearing their willing to do in April. And the conclusion of a quarter is typically when banks look across their firms and assess whether to expand or contract certain business lines.

Another issue is that just a few firms handle much of the clearing for exchange-traded equity options, according to two people familiar with the matter. Goldman Sachs Group Inc., Bank of America Corp. and ABN AMRO Bank NV are dominant, said the people who asked not to be named in discussing data that isn’t public.

Goldman Sachs, Bank of America and ABN declined to comment.

During a March 24 public call with an industry advisory panel, Tarbert said the CFTC wanted to ensure bank capital rules don’t create “disincentives” for firms to provide liquidity to the options market. However, he said bank regulators would ultimately be the ones who would have to make any changes.