Fed is worried about inflation but doesn't want to spook markets: Manulife's Petursson

While much of Wall Street is ringing alarms about out-of-control inflation, Federal Reserve Chair Jerome Powell and his colleagues are expressing confidence in a more benign outlook.

Acceleration in U.S. price growth this year will have “only transitory effects on underlying inflation,” Fed Vice Chair Richard Clarida said Wednesday, playing down that consumer prices climbed in April by the most since 2009.

Governor Lael Brainard said the day before that officials should be “patient though the transitory surge.” Powell has made the same argument.

While policy makers expect the Fed’s preferred measure of inflation to rise to around 2.4 per cent this year as the economy reopens and the pandemic recedes, they forecast it to return to their 2% goal for 2022.

“The case is really quite strong for the outlook for inflation being quite moderate,” said David Wilcox, a former head of the Fed’s research division and now a senior fellow at the Peterson Institute for International Economics. “The basic strategy is exactly the right one, which is to project a realistic confidence about the outlook for inflation, combined with a readiness to pivot if circumstances change.”

Much is at stake. The Fed’s new policy framework, approved last August, pledges more patience in viewing inflation. It now aims for an average of 2 per cent over time, including some overshooting for past misses, and want to achieve more inclusive employment that aids lower-income workers and minorities.

Here are six reasons why Fed leaders are confident inflation pressures will be transitory:

Fed officials have come to regard inflation expectations as the first line of defense against surging price growth.

Clarida, in a speech last week, pointed out the same dynamic is true in market measures of inflation expectations, with inflation expected to drop back after the next five years. That suggests that the breakout this year won’t persist, he says.

“If inflation expectations remain fairly well anchored, that is a factor that will pull inflation back down,” said Robert Rich, who directs the Cleveland Fed’s Center for Inflation Research. “As long as they stay stable, that is a critical part of the story.”

“After a downward shock in 2020, tailwinds from reopening the economy conspired in April to drive inflation significantly higher than consensus expectations. However, nearly 60% of the month-over-month increase in the headline was comprised of just five components -- used cars, rental cars, lodging, airfares, and food away from home -- that are very much transient in nature.”

While Fed officials say that the relationship between slack in the U.S. job market and wages and inflation isn’t as close as it was in prior decades, there’s still a loose tie that makes it hard for prices to surge when Americans are hurting.

Powell said it would take a “very strong labor market” to push up wages and inflation. “It seems unlikely, frankly, that we would see inflation moving up in a persistent way that would actually move inflation expectations up while there was still significant slack in the labor market,” he said during an April 28 press conference.

Fed officials cite the proportion of the working-age population that is employed as a better measure than unemployment in judging the health of the job market. In April, 76.9 per cent of those ages 25 to 54 were employed, compared to more than 80% before the pandemic and prior to the 2007-09 recession. The percentages are even lower for Blacks and Latinos, Brainard pointed out Tuesday.

Prices for commodities such as copper and lumber are booming, yet Fed officials have attributed these gains to bottlenecks as the economy reopens, saying they’re not indicative of longer-run price trends.

That view is supported by a number of creative ways of looking at inflation. The Atlanta Fed compiles an index of sticky prices -- or those that don’t move often -- giving a signal on underlying inflation and excluding fast-changing commodities like gasoline and lumber. The sticky-price index rose a modest 2.4 per cent over 12 months through April, far slower than flexible prices. 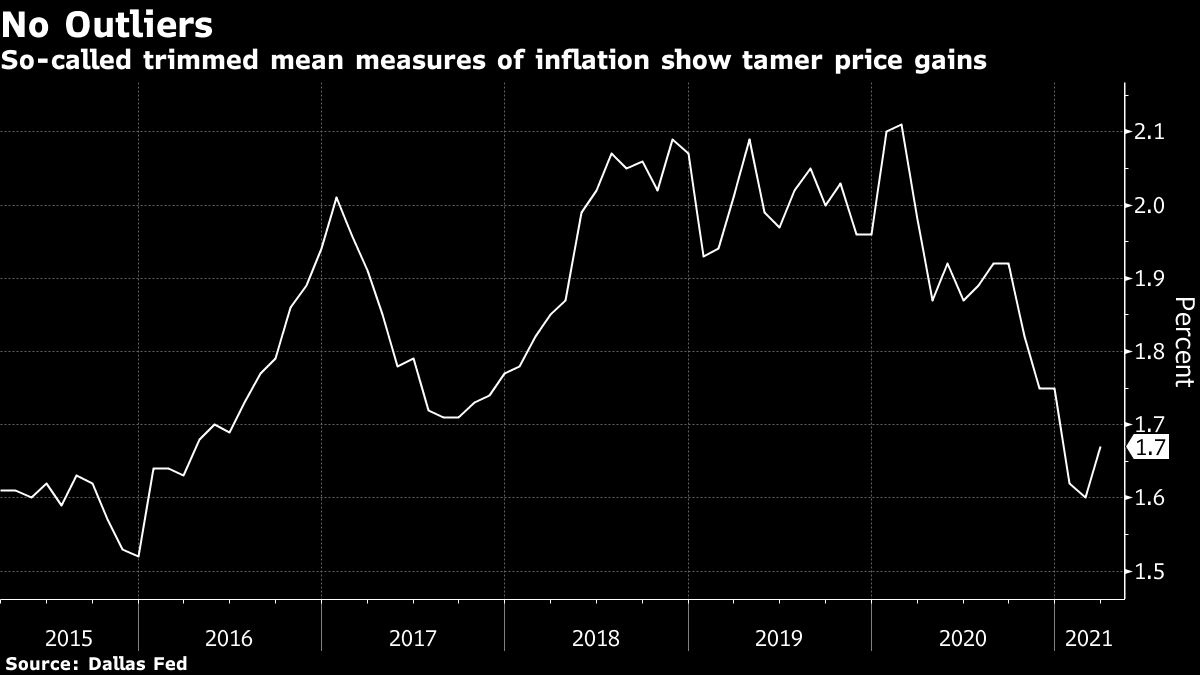 Both the Dallas and Cleveland Feds produce indexes that exclude outlier prices that are rising and falling the most in any given month, called a trimmed mean index. The Fed has frequently discussed the indexes during its policy meetings and some officials see them as superior to core-inflation indexes, which just strip out food and energy.

“The whole goal is to separate out those movements in inflation that are transitory versus those that are more persistent” and “filter through the noise,” said Cleveland Fed’s Rich. An economist at the bank, Edward Knotek, adds, “It gives a little more confidence that upward pressure we are seeing is likely to be transitory.”

A number of structural factors have led to global disinflation over the past three decades. These include globalization, which has given cheaper access to supplies and labor from around the world, slowing growth and aging of the population which reduce demand over time, and advances in technology and the Internet. Those forces are likely to keep pushing against higher price pressures.

“You have disinflationary forces that are tough to break,” Richmond Fed President Thomas Barkin said in a recent Webcast. “I love to buy books. But when I go to a Barnes & Noble and I see a book that is at US$30 I go on my phone. If the book is US$14.99 on my phone, I press ‘bought.’ Some of the barriers to price shopping have dropped considerably.”

Online shopping has become even more important during the COVID-19 pandemic. Reflecting the importance of technology disrupting businesses, the Dallas, Atlanta and Richmond Feds are holding a virtual conference on the subject later this month.

Outside of passing on commodities prices, most U.S. firms remain reluctant to raise prices on other goods. Surveys of businesses, including by the Atlanta Fed, show that most firms expect a pickup in inflation over the next year, but that expectations over the next five to 10 years haven’t changed much.

“Firms that are the most heavily disrupted by supply chain issues are the ones with the highest inflation expectations over the next year,” said Brent Meyer, Atlanta Fed policy adviser, who heads its economic surveys. “We have not seen this spill over into five to 10 year expectations. That gives me a bit more confidence” in forecasts for transitory price gains.

One reason firms may not be willing to project price hikes is they lack leverage with increasingly giant customers like Walmart Inc. or Home Depot Inc., said Richmond Fed’s Barkin.

“I’ve spoken to power tool manufacturers and tried to ask are you going to pass on these cost increases to Home Depot and Wal-Mart,” he said. “They are not because you have got big powerful national chains with bargaining power. They are very concerned about their ability to keep business.”

Twelve-month inflation readings have big swings when there are large changes in year-earlier months, creating “base effects” which will be particularly pronounced because prices fell so steeply this time last year as the economy locked down because of COVID-19.

“These base effects will contribute about 1 percentage point to headline inflation, at about 0.7 per cent of a percentage point, to core inflation in April and May,” Powell said in his April press briefing. “So significant increases, and they’ll disappear over the following months and they’ll be transitory.”

The extra-large year-earlier figures that occurred during the early periods of the pandemic will drop out by September. In the same way, the April figure brought about by current pricing pressure will drop out of indexes in another year