A Fed cut could depreciate the loonie's competitiveness: Economist

The Federal Reserve is widely expected to lower interest rates by a quarter-point at its meeting that concludes Wednesday and leave the option open for additional moves despite demands by President Donald Trump for a “large” rate cut.

“We may get a dissent or two, but it seems like a 25-basis-point cut is pretty much locked in,” said Julia Coronado, president and founder of MacroPolicy Perspectives LLC in New York.

The Federal Open Market Committee will issue a policy statement at 2 p.m. after the two-day meeting concludes and Chairman Jerome Powell will brief reporters 30 minutes later.

The immediate outlook for policy has been made crystal clear thanks to a communications flub by New York Fed President John Williams in a July 18 speech.

Odds for a half-point cut rose after he recommended swift policy action if the economy weakens when rates are low, but fell back after the bank later clarified that he was not discussing upcoming policy moves. Trump weighed in on Williams’s remarks, saying a day later that he liked his first statement much more than his second. 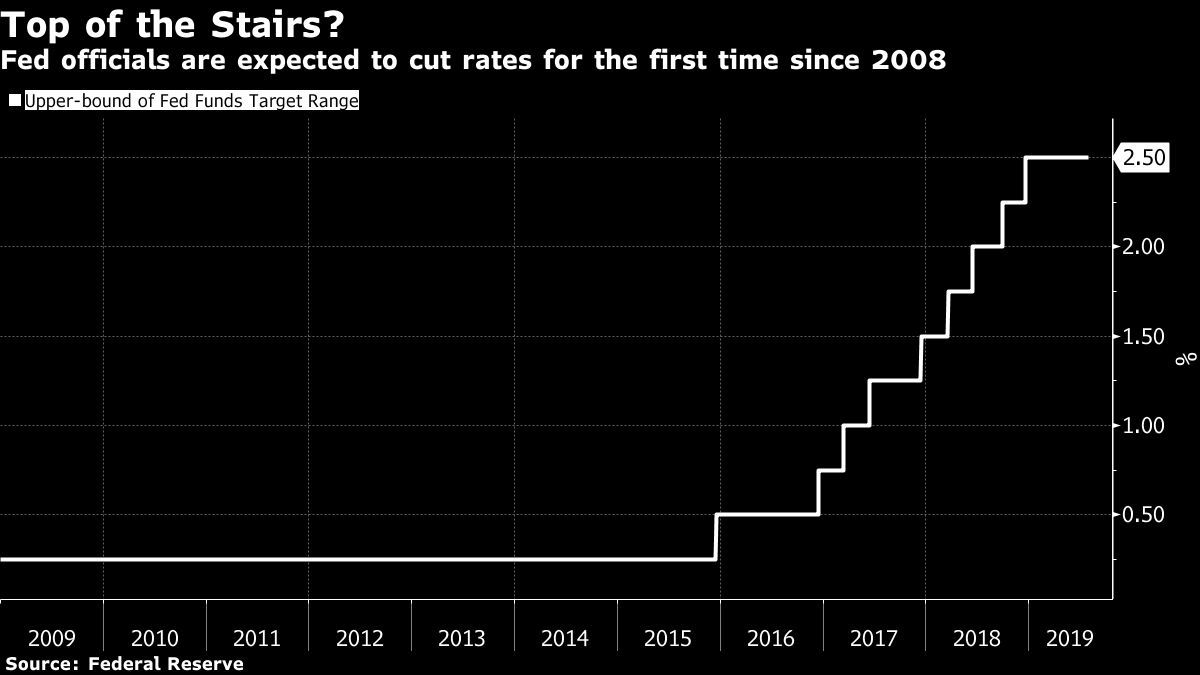 The meeting still contains drama. It’s unclear how much opposition even a quarter-point cut will face within the FOMC, or what signal will emerge about the scope for further easing.

Underlying both questions are uncertainties about just how much the U.S. economy is likely to slow and how monetary policy should respond.

“For a lot of them, 25 will feel like a down payment,” said William English, a professor at Yale University and former senior Fed economist. “But I think they’ll be willing to wait to get more information and make a decision about how much easing to do over time.”

“Uncertainty toward the timing and scope of additional action leaves markets more sensitive to signals of future policy measures than the well-telegraphed rate cut looming at present. Policy makers would be wise to take advantage of recent upbeat economic data to outline the parameters for a modest recalibration of rates in order to avoid getting pressured into a more pronounced easing.”

Before Williams spoke on July 18, investors were pricing in a quarter-point cut. Powell had laid out the case for easing amid global economic uncertainties and muted inflation. Other policy makers argued for lowering rates in a “risk management” approach.

In his remarks, Williams reviewed his long-standing belief that central banks should move aggressively in a downturn when rates are near zero. Investors took it as a signal that a half-point move might be on the table, until the New York Fed issued the clarification.

That steer, combined with a solid -- though not spectacular -- report on second-quarter economic growth, reduced the chances of a half-point cut to “almost zero,” said Carl Tannenbaum, chief economist at Northern Trust Corp. in Chicago.

The data showed the U.S. economy expanded at an annualized pace of 2.1 per cent, slower than the first quarter but above the 1.8% expected by economists.

Central bank watchers anticipate some regional Fed presidents will argue against any cut at all. That group includes two current FOMC voters, Kansas City’s Esther George and Boston’s Eric Rosengren, so resistance could spur two dissents. The meeting’s minutes will be released on Aug. 21, providing a fuller picture of any divide, and officials may detail their views in public in the meantime.

Several economists expect the committee’s post-meeting statement will repeat language from June promising to monitor incoming data and to “act as appropriate to sustain the expansion.” That will likely lead investors to expect another quarter-point cut as early as September, without committing the Fed to such a move.

“The intention is likely to do another 25, but the data will ultimately determine the willingness to do more,” said Michael Gapen, chief U.S. economist at Barclays Plc in New York.

Powell can then use his press conference to further shape rate expectations. Another challenge will be to explain why the committee went ahead with a cut despite a slew of positive news. Since the Fed last met, the U.S. and China have returned to the trade negotiating table, and fresh U.S. employment and spending numbers have come in strong.

“That’s a tricky issue for him,” said English. “Since June, the data’s been pretty good.”

He may also get questions on whether the Fed would join the U.S. government in intervening to weaken the dollar to aid U.S. exports after Trump told reporters last week that he had not ruled it out.

Financial markets will also watch for an early end to the runoff of securities from the Fed’s balance sheet. That process, scheduled to conclude at the end of September, modestly tightens policy by removing downward pressure on long-term bond yields.

Economists were divided on whether officials will want to halt the runoffs when they cut interest rates. Few saw an immediate cessation as likely, but some said it would simplify communications about the direction of monetary policy.

“The markets won’t be affected either way, but it’s a cleaner message” if the Fed halts the runoffs, Coronado said.

--With assistance from Alexandra Harris