What to expect from the U.S. Fed

Federal Reserve Chairman Jerome Powell says the central bank has no bias in whether its next move is up or down, but his colleagues may deliver a more hawkish message.

The Federal Open Market Committee is likely to forecast one interest-rate increase for this year, down from two in December’s projection, plus one more hike in 2020 -- though it’s a close call, according to economists surveyed by Bloomberg.

Even so, the committee will probably repeat that it will stay “patient” with future rate “adjustments” in its policy statement released at 2 p.m. on Wednesday in Washington, as well as announcing when it will end the gradual shrinking of its US$4 trillion balance sheet.

The rate projections in an updated dot plot, along with other economic forecasts, will be released with the committee’s statement. Powell, who in January began holding a press conference after every FOMC meeting, will start speaking to reporters 30 minutes later.

The FOMC’s rate forecasts will be a clear focus of questions for Powell, who has distanced his views from the quarterly projections. In a March 8 speech he compared the dots to French artist Georges-Pierre Seurat’s pointillism: “If you are too focused on a few dots, you may miss the larger picture.”

“For this year, there will be a very pronounced downward moment in the dots,’’ said Ellen Zentner, chief U.S. economist at Morgan Stanley in New York. “They are looking at the world differently and the path of policy differently. There should be a notable move lower in the median, and participants should be fairly evenly split between one hike this year and zero. It is a highly uncertain outcome.’’

For 2020, 2021 and beyond, the dots are likely to show some divergence among policy makers over the outlook. The December forecast showed rates peaking at 3.125 per cent in 2020 and 2021, with a majority of officials clustered around that level. But the new dot plot may be more scattered -- with some officials projecting several more hikes while others see no further moves, or even a cut. 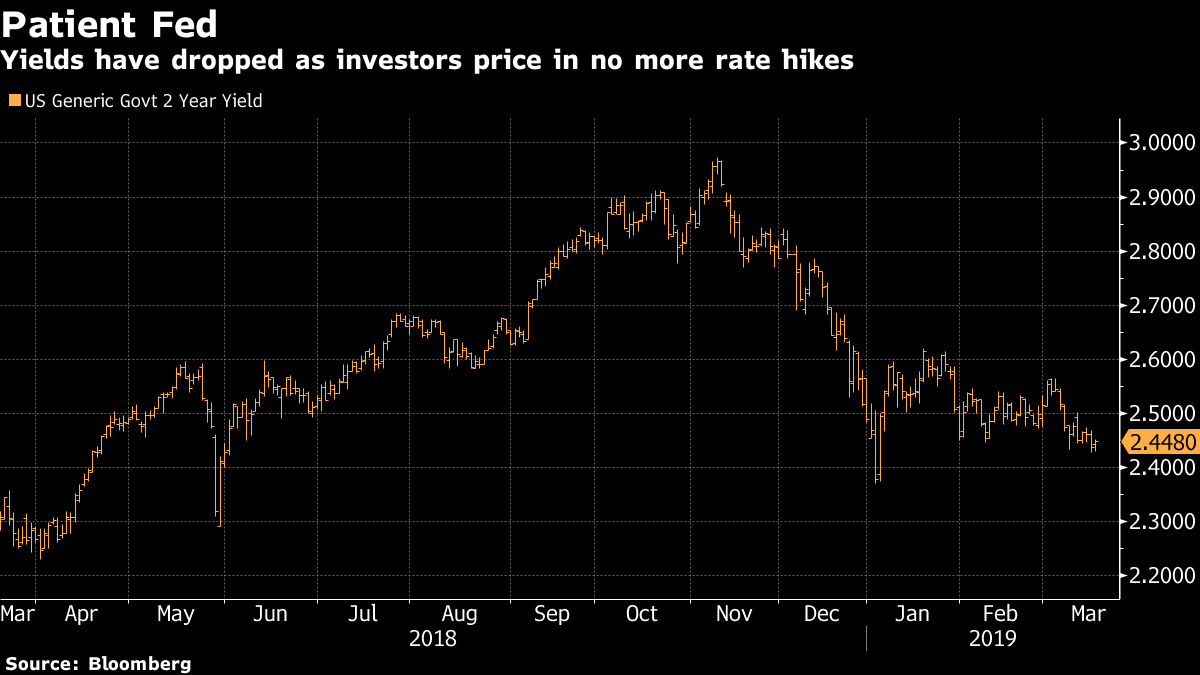 The forecasts could throw cold water on investors’ expectations that the Fed has ended rate hikes. The two-year U.S. Treasury yield has dropped half a per centage point since early November as global growth slowed and central bankers grew less confident in their outlook.

“Many investors are assuming the Fed is done tightening, and that’s not what the Fed has been saying,’’ said Roberto Perli, a partner at Cornerstone Macro LLC in Washington. “The dots, although they will probably be lower than in December, are likely to reflect another hike or two before the tightening cycle is over, and that might come as a surprise to many.’’

While the FOMC statement is likely to be similar to January’s, the description of current conditions could be lowered. The median economic growth forecast for this year is likely to be cut to 2.2 per cent from 2.3 per cent in December, and the unemployment rate forecast could edge higher.

That reflects a slow start to 2019, with the Atlanta Fed’s tracking estimate of growth at less than 1 per cent, as well as continuing headwinds, from a battle over trade tariffs and the delayed impact of past rate hikes. 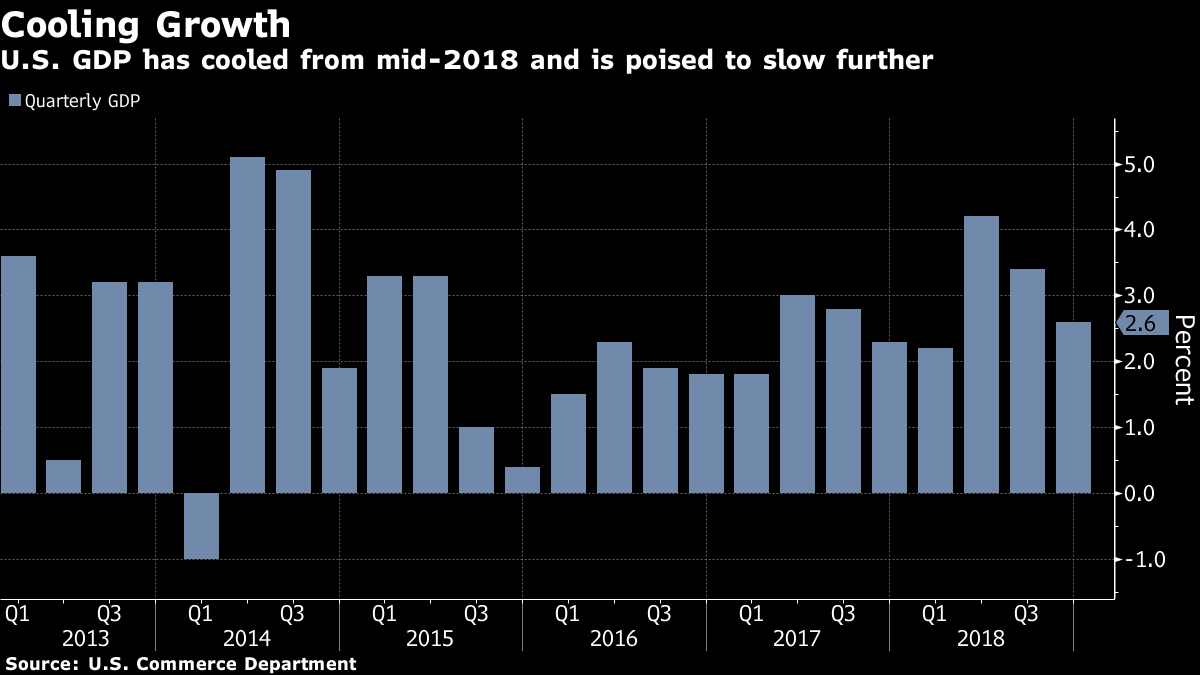 “The markets are going to be looking for any change in tone in the statement,’’ said Lindsey Piegza, chief economist at Stifel Nicolaus & Co in Chicago. “The recent data have been very uneven’’ and the FOMC faces “a tremendous amount of uncertainty about the sustainability of the recovery and inflation.’’

Global growth has slowed and the European Central Bank in early March slashed its forecasts while delivering a fresh round of stimulus.

Economists also expect the FOMC to announce when it will halt the process of managing down the size of its balance sheet as the Treasuries and mortgage-backed securities it holds mature. They see that end date as most likely in the fourth quarter, at which point the Fed’s balance sheet will be around US$3.5 trillion compared with its post-crisis peak of US$4.5 trillion.

“Any communication on the balance sheet will be important to investors,’’ said James Ong, senior macro strategist at Invesco Ltd. in Atlanta. “Markets are expecting a final target size for the balance sheet and some information on how the Fed will changes its caps in order to get there.’’

The balance-sheet announcement is likely to leave some questions unanswered, including the duration of securities the Fed will hold as well as what to do with mortgage-backed securities. The central bank has expressed interest in moving to Treasuries-only holdings over time, leaving open the possibility that it may eventually opt to sell remaining mortgage-backed securities to eliminate them from its portfolio.