Federal Reserve officials said a strengthening economy and higher inflation could lead to earlier and faster interest-rate increases than previously expected, with some policy makers also favoring starting to shrink the balance sheet soon after.

“Participants generally noted that, given their individual outlooks for the economy, the labor market, and inflation, it may become warranted to increase the federal funds rate sooner or at a faster pace than participants had earlier anticipated,” according to minutes published Wednesday of the Dec. 14-15 meeting of the U.S. central bank’s policy-setting Federal Open Market Committee, when it pivoted to a more aggressive inflation-fighting stance.

“Some participants also noted that it could be appropriate to begin to reduce the size of the Federal Reserve’s balance sheet relatively soon after beginning to raise the federal funds rate,” the minutes said. 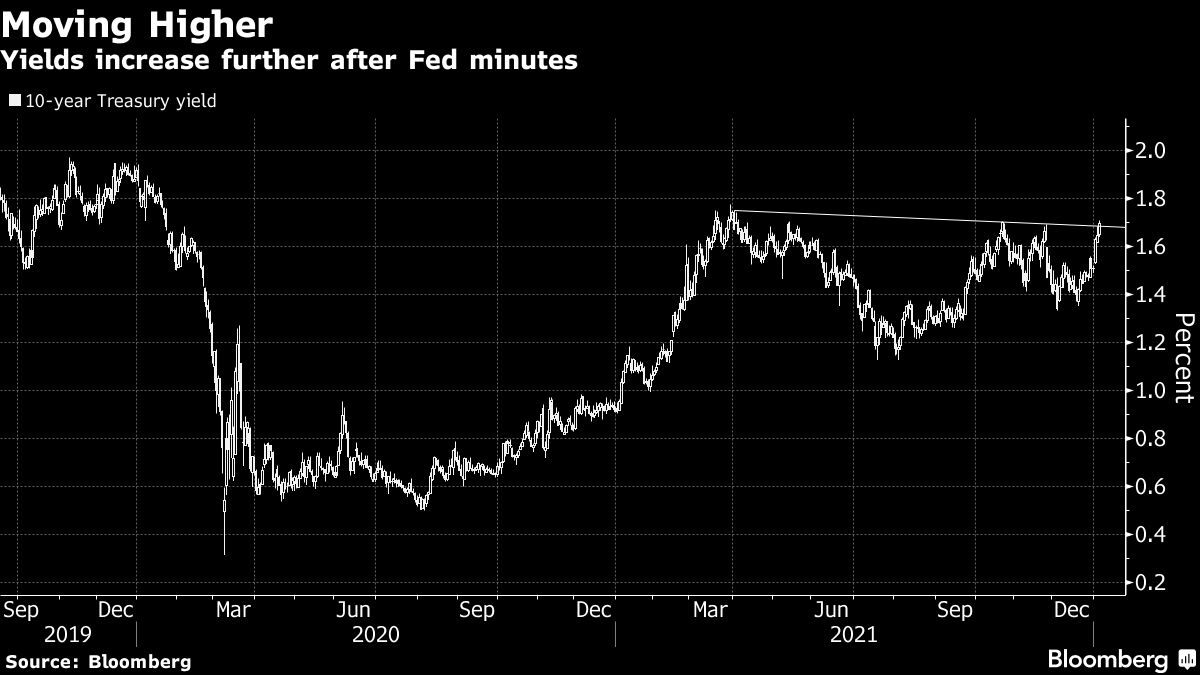 The S&P 500 stock index extended declines following the release, falling 1.9 per cent at the close, the biggest loss since November. Yields on 10-year Treasuries rose to as high as 1.7087 per cent, a level last seen in April, and overnight swaps markets moved to price in an 80 per cent chance of a 25 basis-point hike at the Fed’s meeting in March.

At the conclusion of the December meeting, the FOMC announced it would wind down the Fed’s bond-buying program at a faster pace than first outlined at the previous meeting in early November, citing rising risks from inflation. The new schedule puts the central bank on track to conclude purchases in March.

What Bloomberg’s Economists Say...
“The minutes showed the FOMC is coalescing around the view the economy is ready for a broad-based removal of monetary accommodation, and the omicron variant is unlikely to slow it down. We think the risk of rate liftoff at the March meeting has increased substantially, and will be watching closely Fedspeak ahead of the January meeting for further indications.”
-- Anna Wong, chief U.S. economist

Fed officials were also unanimous in expecting they would need to begin raising rates this year, according to anonymous projections published after the meeting. That marked a shift from the previous round of forecasts in September, which had shown the FOMC at the time was evenly divided on the question.

Neil Dutta, head of U.S. economics at Renaissance Macro, took the minutes as a sign that “the Fed is on a glide path to a March rate hike.”

“That the Fed is signaling it might be appropriate to go sooner is them giving the go-ahead for a March hike,” Dutta said. “I expect them to announce the run-off before year end.”

At the time of the meeting in mid-December -- before the omicron variant had surged more widely throughout the U.S. -- Fed officials generally saw the strain as adding to inflation risks, according to the minutes.

Rising housing costs and rents, more widespread wage growth and more prolonged global supply bottlenecks, “which could be exacerbated by the emergence of the Omicron variant,” fueled changes to officials’ inflation outlooks, the minutes said.

Since the meeting, omicron has spread rapidly throughout the country, disrupting airline travel and schools while also presenting challenges to restaurants and other businesses.

Fed officials received a briefing from staff members on issues related to normalization of the central bank’s US$8.8 trillion balance sheet. During the last rate-hike cycle in the 2010s, the Fed waited almost two years after liftoff to begin trimming assets.

This time around, “participants judged that the appropriate timing of balance sheet runoff would likely be closer to that of policy rate liftoff than in the committee’s previous experience,” the minutes said.

In addition, “some participants judged that a significant amount of balance sheet shrinkage could be appropriate over the normalization process.”

The minutes suggest “fast and furious normalization” compared with the last round of balance-sheet runoff, said Omair Sharif, founder and president of Inflation Insights.

There are still about four million fewer Americans working than before the pandemic began. The unemployment rate fell to 4.2 per cent in November, well below the peak of 14.8 per cent in April 2020 but still above the 3.5 per cent rate that prevailed in February of that year.

A Labor Department report on December employment due out Friday is expected to show employers added about 425,000 people to payrolls, while the unemployment rate fell to a new pandemic low of 4.1 per cent, according to the median estimates of economists.