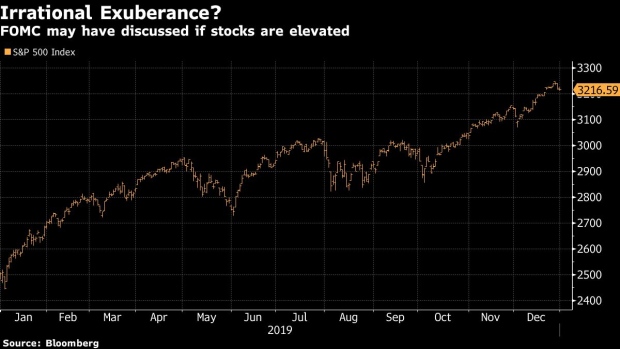 (Bloomberg) -- The Federal Reserve may drop a hint on plans for the repo market in minutes of its December meeting, plus what it would take to shift the view among officials that interest rates are on hold all year.

The closely scrutinized description of the Dec. 10-11 gathering will be released at 2 p.m. in Washington on Friday. Thirteen of 17 officials forecast rates would be unchanged through the 2020 U.S. presidential election year, according to updated economic projections issued at the time, with four penciling in a quarter-point increase. No one forecasts a rate cut through the end of 2022.

Chairman Jerome Powell says it would take a “material reassessment” in the outlook to warrant a shift in policy, so any details on what would meet that threshold will be hungrily consumed. But with a clear consensus that policy is in the right place for the foreseeable future, investors will also focus on the Fed’s characterization of the steps it’s taken to calm money-market conditions and if more needs to be done.

The central bank in October announced purchases of Treasury bills at an initial pace of $60 billion a month, which the Federal Open Market Committee viewed as a technical change to restore ample banking reserves in the system to relieve strain in repo markets. Powell has repeatedly said this isn’t a return to quantitative easing because the Fed isn’t actively trying to lower borrowing costs by purchasing longer-dated securities.

“There is a satisfaction of where they are with monetary policy but there’s uncertainty about the repo market and how it is working,” said Diane Swonk, chief economist with Grant Thornton in Chicago. “The Fed is trying to keep the market liquid. Their comfort with the repo market is much less clear-cut. It does feel like a work in progress.”

Market participants want a sense from the Fed on whether it will create a standing repo facility, a tool that would let eligible banks convert Treasuries into reserves on demand at an administered rate. Powell said Dec. 11 that it will take some time to evaluate that option.

“Balance-sheet policy offers more opportunities for excitement” from the minutes, said Roberto Perli, a partner at Cornerstone Macro LLC in Washington and former Fed economist. “The FOMC may have discussed the opportunity of a standing repo facility further. If that was the case, the minutes should give us a better sense of whether such a facility is in the cards.”

Powell also said the Fed is willing to extend its T-bill buying to coupon-bearing securities if necessary -- but the central bank isn’t at that point yet. The minutes could shed light on how seriously such a move was under consideration and the level of opposition to taking that step, which would fan debate on whether the Fed has restarted QE by purchasing longer-dated instruments than T-bills.

Jerome Powell caught the market’s attention by suggesting a potential willingness for the Fed to purchase coupon securities if necessary to help alleviate strains in wholesale funding markets. Given the consensus around rate policy, officials presumably had more time at the meeting to evaluate repo market issues.

The FOMC forecasts in December showed most participants projected no change in interest rates in 2020. Powell has said it would take a “material” change in the outlook to warrant a move in either direction, but the committee has been vague on what that precisely means. There could be some discussion in the minutes on what would trigger any move.

“I think they chose a vague term on purpose,” said Stephen Stanley, chief economist at Amherst Pierpont Securities LLC. “Perhaps there is more detail in the minutes, but a vague construction was likely necessary to get a broad consensus.”

Financial markets had a strong year in 2019, with the S&P 500 index rising 29%, the most since 2013. But Boston Fed President Eric Rosengren and Kansas City’s Esther George have expressed concern that elevated asset values could pose risks to financial stability. The minutes could give a clue of whether those concerns are more broadly shared.

“There will probably be some discussion of risks from financial markets, though it is striking that the committee is less worried about financial excesses than it was a year earlier even though stock prices are up,” said Jonathan Wright, economics professor at Johns Hopkins University in Baltimore.

The FOMC is discussing tweaking its monetary-policy framework, perhaps adapting how it pursues its 2% inflation target. One option is aiming for that goal on average, which would warrant overshooting to make up for past misses. While the committee isn’t close to concluding discussions, the minutes could reveal an update on whether a consensus is building.

To contact the editors responsible for this story: Alister Bull at abull7@bloomberg.net, Scott Lanman