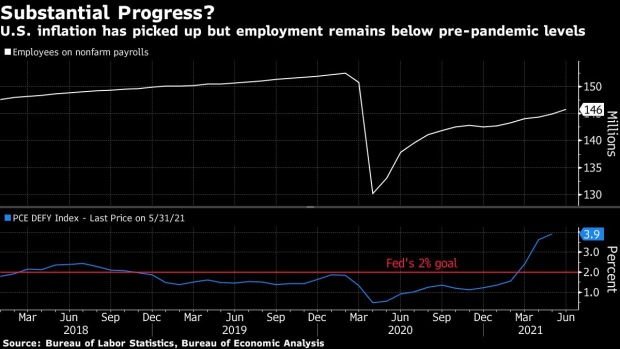 The Marriner S. Eccles Federal Reserve building in Washington, D.C., U.S., on Saturday, June 26, 2021. The Federal Reserve might consider an interest-rate hike from near zero as soon as late 2022 as the labor market reaches full employment and inflation is at the central bank's goal. , Bloomberg

(Bloomberg) -- The record of the Federal Reserve’s meeting last month, which surprised investors with a hawkish pivot, will be scrutinized on Wednesday for any hints on when the central bank will pare back its support for the economy.

The Fed delivered a double-whammy at the June gathering after its quarterly economic forecasts showed officials expect two rate hikes in 2023 and Chair Jerome Powell announced the central bank was getting the taper debate into gear.

“We’re watching out for any clues that we might get regarding the tapering of asset purchases,” said Citigroup Global Markets chief U.S. economist Andrew Hollenhorst. “Any clues about the timing or the composition, but my expectations is that we won’t get too many details.”

Analysts will be combing through the minutes for details on tapering, including when it could start and what the pace might be -- though that level of discussion might be more likely at upcoming Fed meetings, including its gathering later this month.

Minutes from the Fed’s June 15-16 meeting are scheduled to be released at 2 p.m. Washington time. Here’s what to watch out for:

The Fed has been buying $80 billion of Treasuries and $40 billion of mortgage-backed securities every month in an effort to bolster the economy during the pandemic. After Powell indicated that the Federal Open Market Committee would start talking about when it might be appropriate to start reducing these purchases at subsequent meetings, a number of officials voiced support for starting the process sooner rather than later, including before the end of this year.

Atlanta Fed President Raphael Bostic said that the central bank could start slowing its asset purchases in the next few months as the economy recovers faster than expected from the pandemic.

The Dallas Fed chief, Robert Kaplan, has said he wants the process to start “soon,” so as to avoid excess risk taking in markets and so that the Fed won’t need more aggressive measures, including rate hikes, to halt financial excess later.

San Francisco Fed President Mary Daly, customarily a more dovish member of the committee and, along with Bostic, a voter on monetary policy this year, told the Associated Press last week that a start to tapering this year may be appropriate.

Kaplan and St. Louis Fed President James Bullard have also indicated they may be in favor of tapering MBS purchases first, as surging price increases in the housing market fan worry it is overheating.

The Fed has said since December that it would continue its bond purchases until it had achieved “substantial further progress” on its employment and inflation goals.

Some Fed officials have expressed concern with recent price increases amid a quickening reopening and supply-chain constraints, while most note that it’s likely temporary. The minutes may provide a clue on whether more officials are viewing the higher inflation readings as potentially longer-lasting.

Powell and others have said that the U.S. is likely to see robust payrolls growth this summer and into the fall. The economy has averaged more than 600,000 new jobs per month since January, including 850,000 in June, the biggest gain in 10 months, government data released last week showed.

Reports of businesses, especially in the restaurant industry, struggling to find workers indicate to some Fed officials that the labor market is tightening.

Morgan Stanley economist Ellen Zentner said in a note published Tuesday that the jobs report doesn’t indicate a big swing toward maximum employment, but does keep taper talks on the table.

“It keeps the Fed on track to hammer out the details on how to taper at its meeting later this month,” Zentner wrote, referring to the Fed’s July 27-28 meeting.

Besides the change to the 2023 median estimate, the dot plot -- a graphical representation of each official’s rate forecast -- also showed seven of the 18 members projecting a rate hike next year, versus just four in March. While it didn’t shift the median from no hike in 2022, it indicates building momentum for a hike sooner than previously expected.

Fed watchers will be on the lookout for any hint in the minutes of discussion around normalizing rates, including how policy makers are thinking about their new framework, which aims to average inflation at 2% over time and mitigate employment shortfalls.

Prices have risen substantially the last few months, with the Fed’s preferred gauge reaching 3.9% in May, while some measures of household inflation expectations have also mounted.

“Part of the idea with the new framework for monetary policy is to get those expectations higher and get them stably higher,” said Hollenhorst. “Are officials seeing this as too high, as something they need to respond to, as inflation expectations becoming unanchored? There could be a really interesting discussion there.”

The June meeting, with its surprises, geared markets up for what’s likely to be an eventful summer. In addition to the next FOMC meeting, the central bank hosts its annual policy retreat outside Jackson, Wyoming in late August. The event has served as a setting for important announcements in the past and is already being viewed as a potential venue for Powell to signal that taper is coming.