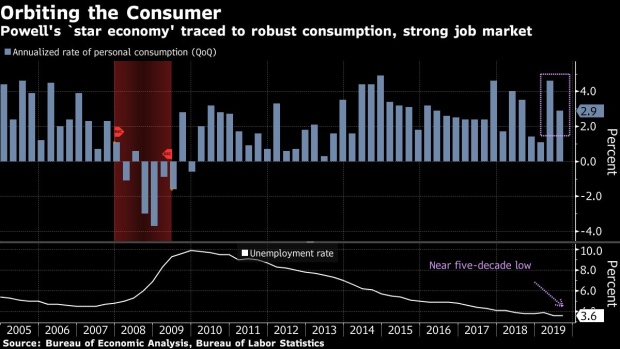 (Bloomberg) -- Federal Reserve Chairman Jerome Powell and his colleagues have been especially chatty since cutting interest rates last month, yet a record of that meeting may still shed light on the strength of conviction among officials that monetary policy is probably poised for a long pause.

Powell addressed Congress twice last week. He maintained his view that rates are in a good place following this year’s third cut on Oct. 30, provided the outlook doesn’t suffer a “material reassessment.”

Minutes of that Federal Open Market Committee meeting will be released at 2 p.m. Wednesday. This year’s final gathering is set for Dec. 10-11.

“We don’t believe the minutes will meaningfully alter expectations for the near-term policy outlook,” economists Kevin Cummins and Michelle Girard of NatWest Markets wrote in a note this week. “However, market participants will be looking for any insights as to what exactly a ‘material reassessment’ to the FOMC’s outlook would entail.”

New York Fed President John Williams on Tuesday stressed that such a judgment wouldn’t be on a hair trigger.

“On this question of materiality, you have to make sure we’re not overreacting to individual data points and really thinking about where it is the economy is over the next year or two,” he told reporters in Washington.

The aging U.S. expansion has decelerated somewhat amid headwinds from weakness abroad and softening business investment stemming from trade policy uncertainty. American consumers, however, have proved resilient thanks to unemployment near a 50-year low and steady payroll gains.

Data since the last meeting have tended to back up the Fed’s case that the strong labor market and household spending are supporting growth. October’s job report, out just after the FOMC meeting, showed employers adding a better-than-expected 128,000 workers last month, despite more than 40,000 being absent from payrolls due to a General Motors Co. strike.

Investors get the message: Pricing in federal funds futures contracts indicate they expect only one more rate cut over the course of 2020.

“The minutes of the Oct. 29-30 FOMC meeting will be relegated to lower-than-usual significance given the extensive amount of Fedspeak following the meeting. Chairman Powell and Vice Chair Clarida, along with a slew of meeting participants, have subsequently weighed in on their preferences for a pause ahead of future policy action, at least at the December meeting. Even the more dovishly inclined meeting participants have expressed a preference to pause and observe the lagged effects of the 75 bps of easing orchestrated since July.”

“The committee used more neutral language in the statement to replace the ‘act as appropriate’ pledge, indicating in our view that the rate cut was the final step of a 75 basis point mid-cycle adjustment,” Goldman Sachs Group Inc. chief economist Jan Hatzius and colleagues wrote in a note. “In the minutes, we will look for further discussion of the path of the policy rate and the growth and inflation outlook.”

Money market strains in September and the Fed’s subsequent decision to resume growing its balance sheet to restore bank reserves will be another area of the minutes getting attention.

The Fed is injecting cash into the system via repurchase agreements through January and buying Treasury bills at an initial monthly pace of $60 billion into the second quarter. Investors will watch for signals that those programs might be extended, as well as debate about creating a standing repo facility to offer a permanent market backstop against cash running short in the future.

Investors will be “on the lookout for further discussion on the recent disruption in money markets and the technical adjustments to its balance sheet,” wrote Wells Fargo & Co. senior economist Sam Bullard.

To contact the reporter on this story: Alister Bull in Washington at abull7@bloomberg.net

To contact the editors responsible for this story: Margaret Collins at mcollins45@bloomberg.net, Jeff Kearns, Vince Golle