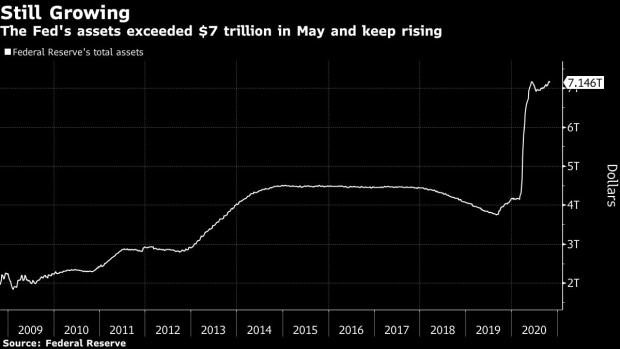 (Bloomberg) -- The Federal Reserve won’t increase the pace of its asset purchases this year or next, and wouldn’t meaningfully boost the U.S. economy even if it did so, according to most economists surveyed by Bloomberg.

Many Fed watchers are eager for more guidance on the future of the central bank’s balance-sheet policy, but aren’t expecting any new clues when the Federal Open Market Committee gathers Nov. 4-5. After their Sept. 15-16 meeting, policy makers provided some additional clarity on the path of interest rates in the years ahead, but offered nothing new on whether the size or pattern of bond buying might be altered.

Fifty-four percent of respondents to the Oct. 23-29 poll said the Fed had so far failed to “adequately describe its balance-sheet policy and tie it to economic goals.”

“Except for its strong guidance that it plans on holding the Fed funds rate close to zero for an extended time period, monetary policy now is highly opaque,” Lynn Reaser, chief economist at Point Loma Nazarene University in San Diego, said in comments submitted with her answers.

Other respondents, however, said it’s unfair to expect anything new from the central bank before next week’s U.S. election results become clear.

“The Fed has to wait and see what the election brings in terms of fiscal policy before the FOMC can make monetary policy decisions,” said Christopher Low, chief economist at FHN Financial, said.

In the survey, 59% of economists said they don’t expect officials to ramp up bond purchases before the end of 2021, and almost none see a change coming this week.

The central bank is currently buying $80 billion in Treasuries and $40 billion in mortgage-backed securities every month to help markets function smoothly and to put downward pressure on borrowing rates for households and businesses.

“As a base case, the U.S. economy will stay on the right track, and no increase in purchases will be needed,” said Roberto Perli, a partner at Cornerstone Macro in Washington. “But if conditions deteriorate, I think the Fed will be quick in increasing purchases.”

Of those who said the buying will increase, two-thirds believe that change will come in the first quarter of 2021.

Asked if a significant increase in the Fed’s purchases would make a meaningful difference in the economy, just 24% said yes.

Economists soundly rejected the idea that policy makers might change the mix of purchases to weight Treasuries more heavily. By contrast, 61% expect the Fed will eventually change the maturity distribution of its purchases to more heavily target longer-dated securities. They currently spread their purchases roughly evenly across the yield curve.

Of economists who anticipate that adjustment, 79% think it will come either in December or in the first quarter of next year.

Several Fed officials, including Chair Jerome Powell, have in recent weeks made unusually explicit appeals to lawmakers to spend more to offset damage to the economy from the Covid-19 pandemic. That runs against the conventional wisdom that central bankers should stay out of fiscal-policy debates. Powell himself used to stress that he wished to “stay in my lane.”

Economists were also asked about Powell’s chances of staying on as chair when his term expires in February 2022. Just under half thought Powell would likely be reappointed by a re-elected Donald Trump, while 57% said a victorious Joe Biden would stick with the current chair.