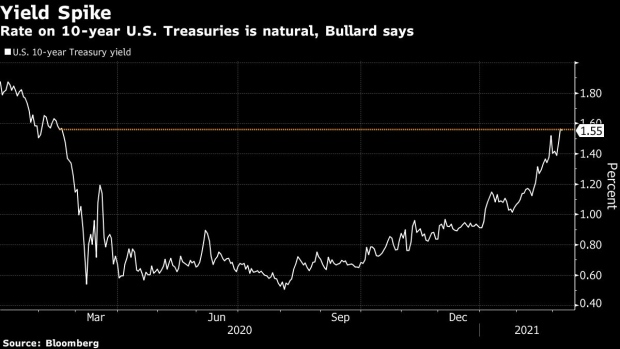 (Bloomberg) -- Treasury yields are rising because of a much stronger economic outlook, Federal Reserve officials said Friday, playing down the need for a monetary policy response.

“As a central banker I am always concerned if there is disorderly trading or something that looks panicky,” Federal Reserve Bank of St. Louis President James Bullard said in an interview with Wharton Business Radio. “That would catch my attention. But I think we are not at that point.”

His remarks, on the final day before the central bank enters a blackout period on public comment before its March 16-17 meeting, follow Chair Jerome Powell’s Thursday caution that rising yields had caught his eye and he would be “concerned by disorderly conditions in markets or persistent tightening in financial conditions.”

Treasuries yields stabilized Friday after spiking higher on a stronger-than-expected payroll report for February, but remain sharply higher than a month ago, nudging up borrowing costs on everything from mortgages to auto loans.

That’s prompted speculation the Fed might lean against the move by purchasing more longer-dated securities, including by reprising a strategy from its past policy playbook called Operation Twist in which it switches out of short-dated holdings into longer ones.

“I don’t see that as an option right now,” Bullard said, noting the “very strong” U.S. economic outlook and already-easy monetary policy: “So it’s not just matching up right now that we have to do anything to be even more dovish than we are.”

While Treasury yields have moved sharply higher, they remain historically low and the shift should not be a cause for concern, he said.

“It is natural for them to be going higher as growth prospects are improving -- not just improving, really, but going very, very strong growth expected in 2021 and beyond and inflation risks moving up.”

The Fed is expected to hold interest rates near zero at its upcoming meeting and reiterate it will keep buying bonds at a $120 billion monthly pace until it sees substantial further progress on employment and its 2% inflation goal.

Like Bullard, other Fed officials characterized the increase in bond yields as a predictable result of a welcomed improvement in the economic outlook.

“The bond market is reflecting I think the strength that we’ve seen in some of the recent data. They’re looking ahead and they’re positive,” Cleveland Fed President Loretta Mester said in an interview on CNN International later on Friday. “Both real rates are higher and inflation expectations in those bond yields are higher,” she said.

Minneapolis’s Neel Kashkari said he would take note if the movement in the bond market reduced the amount of support monetary policy was providing the economy by pushing real yields higher.

“But we’re not seeing much movement in real yields. Most of the movement is in that inflation expectations, or inflation compensation,” he said separately during a live-streamed interview with the Washington Post.