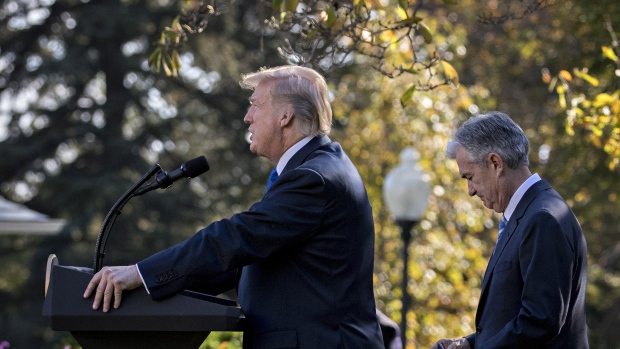 Federal Reserve officials are sticking with their pledge for patience on interest rates, shrugging off President Donald Trump’s escalating trade war and his pressure for a cut.

New York Fed President John Williams and his Kansas City colleague Esther George, who vote on policy this year, acknowledged that new tariffs on Chinese imports could affect the outlook for U.S. inflation and growth. But both saw no need for the central bank to react.

“Policy is in the right place,” Williams said in a Bloomberg Television interview Tuesday in Zurich. “I don’t see any reason to have a bias up or downward in the current circumstances. We’re going to evaluate, assess, to see the best decision to get us to our goals.”

Fed officials held rates steady at their April 30-May 1 meeting and said they will be “patient” on judging the next move in policy after previously signaling they saw no need for a move all year.

“This wait-and-see approach is appropriate because we have not seen upward pressures building on inflation, even though we have experienced above trend growth and a further tightening of labor markets,” George told an audience in Minneapolis.

Investors, on the other hand, have increased their bets that the central bank will cut rates this year after China retaliated against Trump’s tariffs and the U.S. warned there was more to come.

George said she wasn’t ignoring the message from markets. “In the context of an economy that is still growing above potential, the labor market that continues to add jobs, a falling unemployment rate, I don’t see an argument right now for a rate cut,” she said.

That followed other similar comments from Fed officials in recent days, including Atlanta’s Raphael Bostic, who said he was “willing to be patient,” and Boston’s Eric Rosengren, who told Bloomberg Monday it’s too early to tell whether the trade dispute will hurt the U.S. economy.

Officials are trying to keep the economy growing at a solid pace despite headwinds including trade policy uncertainty and a dimming outlook for growth abroad. U.S. unemployment is the lowest in nearly 50 years though inflation remains below the Fed’s 2 per cent target.

Trump earlier sought to enlist the Fed in his trade fight, urging the central bank to “match” what he said Beijing would do to offset the economic hardship caused by U.S. tariffs.

Fed officials say they will ignore political pressure as they focus on their dual mandate for maximum employment and stable prices. They’ve also been careful to say the economic impact of uncertain trade policy will hinge on how long the dispute lasts and what it does to business sentiment and the appetite for risk among investors.

“It has various effects on the economy,” Williams said. “It probably will boost inflation by a few tenths over the next year. It affects demand a bit and growth in the short run. But also its negative effects on the value chains and how our economic system works.”