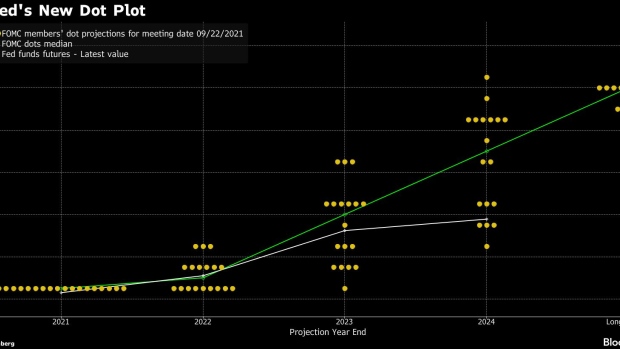 (Bloomberg) -- Federal Reserve officials reinforced the U.S. central bank’s message that it would probably begin winding down its bond-buying program soon, though the economic recovery still had a way to go before interest-rate increases would be appropriate.

Fed Governor Lael Brainard, addressing the National Association for Business Economics, said on Monday that labor-market conditions may “soon” warrant a reduction in the pace of the central bank’s bond purchases, put in place last year to cushion financial markets and the economy from the impact of the pandemic.

Brainard added that “no signal about the timing of liftoff should be taken from any decision to announce a slowing of asset purchases,” referring to an eventual decision to begin raising the Fed’s benchmark policy rate from its current near-zero level.

In a post-meeting statement, the FOMC said a reduction in the pace of purchases of Treasuries and mortgage-backed securities under the program -- currently $120 billion a month -- “may soon be warranted” if the economy continues to progress toward its maximum employment goal.

Fed Chair Jerome Powell clarified during a press conference afterward that “soon” referred to “as soon as the next meeting” of the FOMC at the beginning of November. Meanwhile, quarterly projections published alongside the statement showed the committee was evenly split on the need to begin raising rates as early as next year.

Williams, addressing the Economic Club of New York in a virtual speech, said “there is still a long way to go before reaching maximum employment,” which the FOMC has said is a precondition for rate increases.

Evans, while answering questions from reporters after speaking at the same conference as Brainard, said he had penciled “a first move” toward higher rates into his projections for 2023 and a “very gentle incline” thereafter.

All three said they expected inflation to drift back down toward the Fed’s 2% target next year after pandemic-induced supply chain bottlenecks currently putting upward pressure on prices dissipate. Inflation as measured by the central bank’s preferred gauge was 4.2% in the 12 months through July.

A fourth official, Minneapolis Fed chief Neel Kashkari, also saw inflation easing. “We don’t want to overreact to short-term price movements. We want to make sure we can get the economy back to full strength,” he said in an online Q&A posted on the bank’s website. “It wouldn’t surprise me if it takes six months or most of next year to get people fully back to work.”