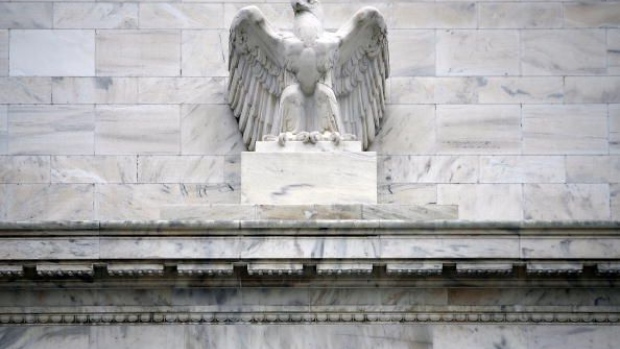 The Federal Reserve building is seen January 22, 2008 in Washington, DC. The Fed cut its benchmark interest rate by three-quarters of a percentage point after two days of tumult in international markets due to fear of a recession in the United States. , Photo by Chip Somodevilla/Getty Images

Federal Reserve officials viewed their current monetary policy as appropriate “for a time” while they remained on guard against domestic and global risks that could slow the longest U.S. expansion on record.

“Participants discussed how maintaining the current policy stance for a time could be helpful in supporting U.S. economic activity and employment in the face of global developments that have been weighing on spending decisions,’’ according to the minutes of the Jan. 28-29 Federal Open Market Committee meeting released Wednesday in Washington.

The minutes showed a broad discussion as officials considered inflation ranges as a tool to achieve their 2 per cent target, how to adapt policy to combat financial-stability risks, and how they would wind down ongoing repurchase agreement and Treasury-bill purchases.

The record also showed “several” officials pushing for “inflation modestly exceeding 2 per cent” for a time. Such action “would be consistent with the achievement of the committee’s longer-run inflation objective” and “underscore the symmetry of that objective.”

The staff official in charge of open market operations told policy makers that in the second quarter, reserve conditions would “support slowing the pace of Treasury bill purchases.”

“Many participants stressed that, as reserves approached durably ample levels, the need for sizable Treasury bill purchases and repo operations would diminish and that such operations could be gradually scaled back or phased out,” the minutes said.

The FOMC left the benchmark lending rate unchanged in a range of 1.5 per cent to 1.75 per cent during the gathering, and said that the setting was “appropriate” to sustain the expansion and achieve its goals of maximum employment and stable prices.

The U.S. economy began 2020 on solid footing with payrolls rising by 225,000 in January. The jobless rate edged up to 3.6 per cent, still near a half-century low, while average hourly earnings climbed 3.1 per cent from a year earlier.

U.S. central bankers are counting on household consumption -- aided by low interest rates -- to sustain growth and help lift inflation back to their 2 per cent target. Their preferred price measure rose 1.6 per cent in 2019.

Within their ongoing framework review, officials held their most substantive discussion to date about the possibility of transforming their inflation target -- currently 2 per cent -- into a range. The review began in early 2019 and is meant to assess whether the Fed has the right tools and strategies to deal with persistently low interest rates and low inflation.

The committee considered inflation ranges based on three concepts: an “uncertainty” range, meant to communicate how wide inflation outcomes might vary and still be considered consistent with the target; an “indifference” range, emphasizing that policy need not respond to deviations within the range; and an “operational” range that could be used when officials wanted inflation to favor one side.

While the U.S. economy started the year in good shape, the coronavirus has raised questions about global growth, including the potential for spillovers affecting the U.S.

Participants expected growth to continue at a moderate pace, supported by accommodative monetary and financial conditions. “In addition, some trade uncertainties had diminished recently, and there were some signs of stabilization in global growth. Nonetheless, uncertainties about the outlook remained, including those posed by the outbreak of the coronavirus,” the minutes said.

Powell told lawmakers in semi-annual testimony last week “it’s too uncertain to even speculate’’ on how the outbreak would impact the economy or if it could present a “material change’’ to the outlook, though he said the impact on China should be “substantial.’’

U.S. central bankers are purchasing Treasury bills at a pace of US$60 billion per month to boost reserve balances and plan to continue the operation into the second quarter. They are also conducting term and overnight repurchase agreements at least through April to offset seasonal demands for payments and cash.

The minutes said the term repo operations could be phased out after April.