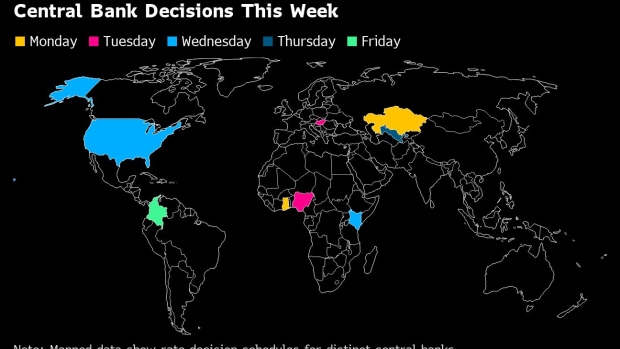 Federal Reserve officials aren’t expected to signal a reduction in support for the U.S. economy when they meet this week, but will debate how to scale back massive bond purchases when the time comes.

Pressure on Chair Jerome Powell to start the taper sooner rather than later has probably been eased by the recent slide in bond yields, as investors worry the spreading delta coronavirus variant could sap the recovery.

He told Congress July 14 that the economy was “a ways off” from reaching the threshold the Federal Open Market Committee has laid out for reducing monthly purchases -- from a current pace of $80 billion in Treasuries and $40 billion in mortgage-backed securities.

Still, policy makers are expected to discuss when to begin the process during their two-day meeting, with concludes Wednesday, as well as at what pace and whether to prioritize MBS over Treasuries. A statement of their decision will be released at 2 p.m. Washington time, with Powell holding a press conference 30 minutes later.

“The Federal Reserve will maintain a steady policy course this week amid market gyrations and some tempering of economic expectations since the June meeting.”

A Bloomberg survey shows economists expect a signal of their intentions as early as the central bank’s Aug. 26-28 annual policy retreat in Jackson Hole, Wyoming, as which the Fed chair is likely to speak.

Powell has promised plenty of advance warning and the economists don’t see a formal announcement to scale back bond buying before December and the actual start not until the first quarter of 2022.

In addition to the Fed, investors in the U.S. await a string of key economic data to end the month.

Early in the week, reports include those on new home sales and durable goods. On Thursday, the market will get its first reading of second-quarter growth -- to determine if it’s peaked coming off the pandemic lows last year. Figures on personal income and spending are due Friday.

In Canada, inflation data for June is likely to show consumer price growth at a decade high and a preliminary estimate for second-quarter GDP is also due.

South Korea GDP figures out Tuesday are likely to show a slowing of growth compared with the previous quarter but still in line with government expectations for a 4% expansion this year. An upward surprise may fuel more talk of an early interest rate hike even as rising virus infections offer an unsettling reminder that the outlook is far from certain.

Bank of Japan Governor Haruhiko Kuroda could shed more light on the central bank’s recently announced lending measure to help battle climate change when he speaks later on Tuesday. A summary of opinions released the following day could offer more details on the range of views within the BOJ’s board on how aggressive the bank’s green action should be.

Taiwan and Hong Kong publish GDP data on Friday. On July 31, China will release its purchasing managers indexes for July.

Investors who are trying to guess how many Bank of England policy makers may favor curtailing the central bank’s stimulus program next month will keep a close eye on Gertjan Vlieghe’s speech next week.

With Deputy Governor Dave Ramsden and policy maker Michael Saunders signaling they might favor tightening policy soon, support from Vlieghe could at least signal significant dissent at the meeting.

In the euro area, economic growth data for the second quarter on Friday will give some insight into how well the region has rebounded from its double dip recession as vaccinations pick up. Figures so far show that manufacturers have been hampered by shortages and delivery delays, but that has been more than compensated for by a reopening services sector that is tapping into a consumer boom.

Figures are also expected to show inflation hit the European Central Bank’s 2% target in July, a reading that the ECB will likely dismiss as temporary.

Elsewhere in Europe, Hungary’s central bank will likely continue raising interest rates to tackle the European Union’s fastest inflation, with the only question being the pace of tightening.

Israel is expected to post another moderate drop in unemployment, although still a long way from the pre-covid low of less than 3.5%. The government is now working to form a new state budget to help squeeze the gap.

Ghana’s central bank will likely leave its key interest rate unchanged at an almost nine-and-a-half-year low on Monday. And on Tuesday, Nigeria will probably keep its benchmark rate on hold for a fifth straight meeting to help the economy recover.

Kenya on Wednesday is also likely to maintain its rate to aid the economy, after the government imposed temporary restrictions on movement to avoid a catastrophic fourth wave of coronavirus infections.

In Russia, consumer data for June due Friday will give a clearer picture of the strengthening recovery, even as a third wave of Covid-19 infections spread.

Mexico on Friday posts its second-quarter GDP report. Look for the combination of recovering domestic demand, base-effect and strong growth in the U.S. to produce a double-digit year-on-year jump in output and a fourth straight quarter-on-quarter expansion.Brazil’s week starts Tuesday with the current account balance, which on a trailing 12-month basis is in the best shape since 2008. Data out Thursday will likely show that Brazil’s broadest measure of inflation slowed for a second month in July after hitting a multi-decade high in May.

In Chile, it’s all on Friday, with June reports on unemployment, retail sales, industrial production and copper production.Closing out the week, Colombia’s central bank holds its monthly interest rate meeting Friday. Regionally, Brazil, Chile and Mexico have already begun to tighten monetary policy in the face of rising inflation pressures, but Colombia isn’t quite there yet given tepid domestic demand and a still-negative output gap. For now, expect Banco de la Republica to keep its key rate at a record-low 1.75%.