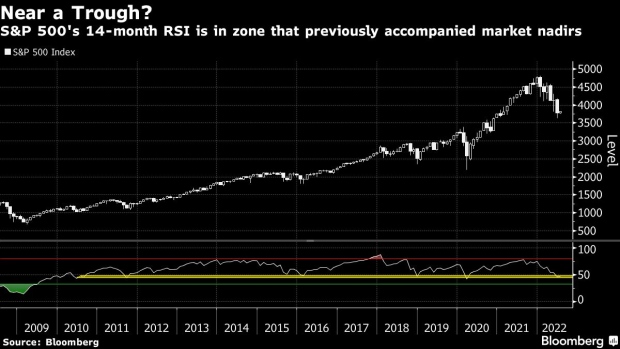 (Bloomberg) -- Respite for the battered US stock market may be just a couple of Federal Reserve policy meetings away.

That’s the scenario laid out by strategists including Kristina Hooper of Invesco, who said September is a possible time-frame for the US central bank to pivot to a slightly less aggressive stance on monetary tightening.

“That could be a real catalyst for US stocks,” Hooper, chief global market strategist at Invesco, said Monday in a Bloomberg Radio interview. The Fed can adopt a less hawkish demeanor in the last quarter in part if inflation expectations are well-anchored, she added.

A fixation on slowing growth is percolating across markets -- leading investors to scale back expectations of how high borrowing costs can go to fight inflation as well as price in Fed interest-rate cuts next year.

One view is that a less belligerent central bank is the needed tonic for stocks after they slid into a bear market this year. That said, sticky price pressures and creaking corporate earnings remain significant pain points for equities.

A major turn from the Fed could occur at its Sept. 21 policy meeting, according to Chris Weston, head of research at Pepperstone Group.

“One where they will pivot to a more accommodative stance, and this could be the trigger for a bullish turn in risk into year-end -- a view the rates market is guiding to and one that is becoming consensus,” he wrote in a note on Monday.

The 10-year US Treasury yield, which approached 3.50% in June, has now dropped to 2.88% amid the growth jitters and rethink of the monetary outlook.

Over at JPMorgan Chase & Co., strategists led by Mislav Matejka say the risk-reward for equities will start to look more attractive in the second half of the year as the Fed policy becomes more balanced following July and September rate hikes.

The Fed “will do faster now and then slow down a little bit,” Christian Nolting, Deutsche Bank AG private bank global chief investment officer, said in a recent interview. The Jackson Hole economic symposium in August will be one that markets will closely watch for clues, Nolting said.