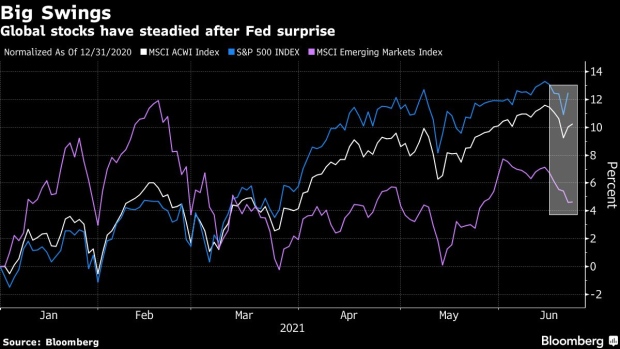 The Marriner S. Eccles Federal Reserve building in Washington, D.C., U.S., on Sunday, June 20, 2021. The White House on Friday reiterated opposition to indexing the gasoline tax to inflation to help pay for an infrastructure plan, raising new questions about the viability of a bipartisan compromise emerging in the Senate. Photographer: Stefani Reynolds/Bloomberg , Bloomberg

(Bloomberg) -- The reflation narrative that’s been a key driver of global risk rallies took a detour after the Federal Reserve’s hawkish pivot. Investors are split over whether the trades are now heading back to the highway or down a blind alley.

Markets are regaining their footing again as stocks bounce back. The Fed’s hints at a gradual tapering of stimulus, including a pair of interest rate hikes in 2023, had roiled risk assets from equities to commodities and Bitcoin, while setting off a surge in the dollar and longer-dated bonds -- the 30-year Treasury yield fell below 2% for the first time since February.

The return to relative calm suggests it’s time to reload reflation trades focused on the assets most likely to benefit from a robust global economic recovery, according to strategists including Natixis Investment Managers and JPMorgan Chase & Co. The latest wobbles have actually strengthened their conviction.

The selloff was “bewildering” and a downright overreaction given the long runway until the first potential rate hike in 2023 and the unreliability of dot plots as a predictor, said Jack Janasiewicz, portfolio manager and strategist at Natixis, which has more than $1 trillion under management.

“This caused a nice quick flush out of some weak hands riding the reflation trade and likely reset positioning to a better place,” he said in an email. “As for the reflation trade, it remains intact. We still find many of the inflation-related worries as transitory which makes us give a more nuanced definition to our outlook: reflation, but not inflation.”

Natixis is sticking with cyclical positions and expects those trades to continue to work, with energy remaining a favorite, Janasiewicz added.

“We expect the trade to resume and see this move as an opportunity to add exposure to cyclical equities and commodities,” they said. “Inflation is likely to continue to realize above both the Fed’s and markets’ expectations, driving bond yields higher and value outperformance.”

Emerging markets are also poised for further outperformance over developed peers, with JPMorgan raising its year-end target for the MSCI Emerging Markets Index to 1,550 from 1,450, implying about a 15% upside from current levels.

Still, the whipsawing market reactions to the Fed are spurring plenty of debate among investors over where to park their cash if reflation trades falter.

Goldman Sachs Group Inc. strategists led by Christian Mueller-Glissmann see a greater focus on short-term rates sensitivity than in the past. Markets are focusing more on labor and inflation data, given the lower potential bar for a Fed liftoff as rapid improvements there may spur investors to price in earlier tightening, according to a note Monday.

“Coupled with slowing growth momentum, this might continue to weigh on risk appetite in the near term, although the repricing across reflationary assets has already been large,” they said.

The best yardstick for measuring out a path from here could be found by looking at the market’s performance in 2004, according to Morgan Stanley strategist Andrew Sheets. It offers the closest comparison to the current mix of a booming post-pandemic recovery, fiscal easing, high savings, low rates, higher inflation and tighter labor markets. Sheets considered a variety of eras within the past century with similar dynamics, but 2004 stood out.

At that time, an extended malaise following the 2001 U.S. recession only troughed in 2003, followed by a surge in equity and credit markets as confidence returned. That means 2004 saw similar valuations in global equities, credit spreads and even volatility as those apparent today, Sheets noted in a report Sunday.

“In short, 2004 represents a more mid-cycle market after a strong, early-cycle rally,” he said. “It saw similar valuations, and what happened next is similar to some key Morgan Stanley forecasts: a pause in equities within an ongoing bull market, lower default rates but slightly wider spreads, modest dollar strength and more mixed equity leadership.”

While there are some key differences -- 2004 was a U.S. election year, there was no quantitative easing and China and emerging-market dynamics were vastly different -- one key lesson to take away is how quickly the Fed moved from preaching patience at the start of the year to hiking rates by June, pushing target rates up 425 basis points over the next two years.