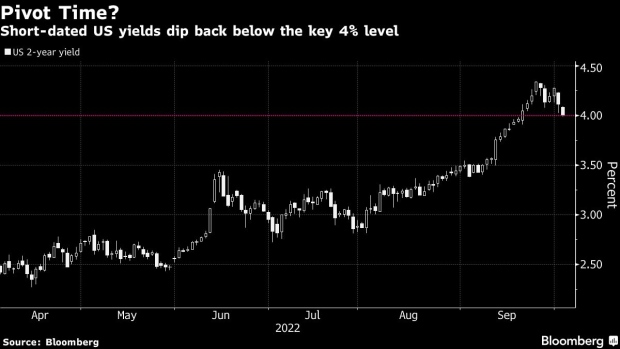 Jerome Powell, chairman of the US Federal Reserve, speaks during a news conference following a Federal Open Market Committee (FOMC) meeting in Washington, D.C., US, on Wednesday, Sept. 21, 2022. Federal Reserve officials raised interest rates by 75 basis points for the third consecutive time and forecast they would reach 4.6% in 2023. Photographer: Sarah Silbiger/Bloomberg , Bloomberg

(Bloomberg) -- Global bonds and stocks are rallying on hopes that the latest signs of weakness in the US economy will push the Federal Reserve to rethink the aggressive monetary policy tightening that some fear will trigger a recession.

The so-called Fed pivot has long been hoped for, and it received another boost on Tuesday with data showing the number of US job openings fell 1.1 million in August, the biggest drop since April 2020 that the US central banks wants to see as it seeks to cool the economy and elevated inflation. The Jolts reading was the lowest since June of last year and the data briefly pulled Treasury yields back towards their session lows, building on a big decline from Monday.

The rapid decline in Treasury yields this week is seen reflecting bearish trades being flushed out in a market lacking reasonable liquidity and amid a highly volatile macro and policy backdrop. Lower Treasury yields have also been accompanied by traders trimming bets on future rate hikes, with money markets signaling that the Fed Funds rate will peak by March. The two-year Treasury yield briefly slid below 4% for the first time since Sept. 21. German short-dated bonds rallied even more, with yields down as much as 16 basis points to 1.46%.

“Central banks may start to realise that raising rates so fast -- especially in Europe -- will lead to a severe recession so they slow down and get volatility down,” said Jens Peter Sorensen, chief analyst at Danske Bank A/S.

But those trying to call an end to the relentless rise of interest rates have been burnt before. Hopes that an economic slowdown would start to tame the march higher in prices have largely proved misplaced so far. And speculation over the summer of a Fed pivot was dramatically shut down by hawkish comments from Fed Chair Jerome Powell at Jackson Hole in August.

The abrupt positioning shift in Treasuries is also vulnerable ahead of the US monthly jobs report due Friday and inflation data next week, with a resilient hiring tone and wage growth forecast by economists. The March 2023 meeting OIS contract edged higher to 4.48% in New York on Tuesday, but remained well inside a peak of 4.75% last week.

“It’s a stretch at this point for the market, particularly in the US to expect a change in Fed policy,” said Greg Peters, co-chief investment officer at the asset manager PGIM Fixed Income. Central banks see stopping inflation as their main job and “they think it means hitting it hard” with higher rates, said Peters. “People are forcing the narrative of the pivot.”

New York Fed President John Williams gave investors and traders similar reason to be cautious on Monday. He said that while tighter monetary policy has begun to reduce inflationary pressures, “our job is not yet done.”

The greenback’s weakness gave some relief to the euro and pound. The latter gained as much as 0.9% to climb past $1.14, its highest since Sept. 20, after crashing on concerns over the new government’s growth plans. The Bloomberg Dollar Spot Index has fallen more than 2% from a peak last week.

As the market bulls looks for signs that the worldwide wave of disruptive hikes is closer to the end than the beginning, the Reserve Bank of Australia offered one this week. It raised rates less than forecast -- a dovish surprise that ended a streak of outsized increases.

European central bankers have also sounded a note of caution. Bank of France Governor Francois Villeroy de Galhau said in an interview Tuesday that the ECB should continue raising interest rates by large increments at its meetings in October and December before reassessing and possibly shifting to a slower pace.

According to Morgane Delledonne, head of investment strategy for Europe at Global X ETFs, it’s hard to say now if we’re at peak rates, but the risks lean “to a dovish turn toward the end of the year rather than a hawkish surprise.”

Whether the current market direction holds may come down to the US labor market, and data due in coming days. Figures on August job opening are due later Tuesday, with the all-important payrolls data coming Friday.

“The next few days will show what the rally in bonds and equities was worth in terms of substance,” UniCredit strategists including Roberto Mialich and Michael Rottmann wrote. “There is no evidence yet that investors are inclined to reverse the recovery many currencies experienced against the dollar at the end of last week.”

“We see Friday’s payrolls report as a potential trigger for a fresh hawkish re-pricing, and a positive event for the dollar,” they wrote.