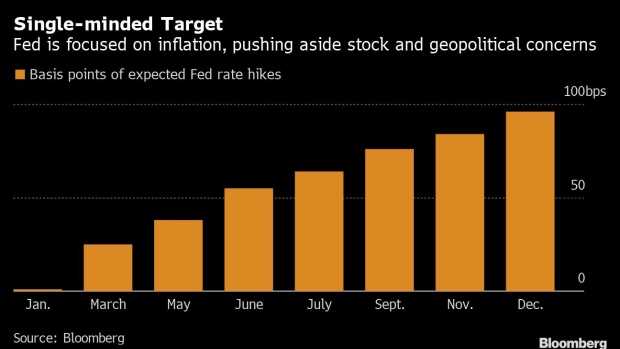 (Bloomberg) -- The tech-heavy Nasdaq 100 has shed around $2.5 trillion in value in just two months. Yet so far, the meltdown has done little to scare the money market into paring back rate-hike wagers.

It’s a wake-up call for a generation of traders, who’ve grown accustomed to supportive measures whenever markets turn south -- the so-called Fed put. Policy action remains elusive this time, with traders maintaining bets that the Federal Reserve will deliver just under 100 basis points of interest-rate hikes this year, starting in March.

The impetus for the aggressive positioning is inflation, which accelerated to a near four-decade high December. Egging the market on are policy makers, who took an abruptly hawkish turn last month by speeding up the drawdown of the Fed’s asset-purchase program and laying out a road map for a series of interest-rate increases over coming years.

“The risks to inflation are to the upside,” said Peter Chatwell, head of multi-asset strategy at Mizuho International Plc. “We probably need to have convincing evidence in place about a weaker underlying inflation dynamic before Fed rate pricing can turn less hawkish.”

Tensions abound ahead of Wednesday’s Fed policy decision, when Chair Jerome Powell will have to address surging consumer prices without denting risk appetite completely. While the market has pared back pricing for March slightly, it still expects a 25-basis-point hike, compared with 15 basis points priced in at the start of the month.

Meanwhile, the selloff in stocks shows no signs of abating. A late surge on Monday was enough to see U.S equity benchmarks close in positive territory, but the futures market on Tuesday points to another leg lower. Nasdaq contracts were down more than 2% as of 8:20 a.m. in New York.

For Julian Emanuel at Evercore ISI, “the average ‘exercise price’,” or the level at which the Fed tends to cave in by easing policy in the face of stock-market losses is a 23.8% peak-to-trough decline. That’s roughly 740 points lower for the S&P 500 Index from Monday’s close.

The bar to pare tightening bets is also high for Antoine Bouvet, rates strategist at ING Groep NV, despite the added headwinds posed by escalating geopolitical tensions. The U.S. put as many as 8,500 troops on heightened alert for deployment if needed as Russian troops mass on Ukraine’s borders.

“Ultimately, geopolitical tensions in Eastern Europe are far away from the Fed’s core set of concerns and there can be legitimate doubts whether high inflation would allow the ‘Fed put’ to work,” Bouvet said.

Still, he is keeping a close eye on near-term Fed tightening wagers. If the market cuts back pricing for the March meeting to 12.5 basis points, that would create significant doubt about the Fed’s intentions, he said.