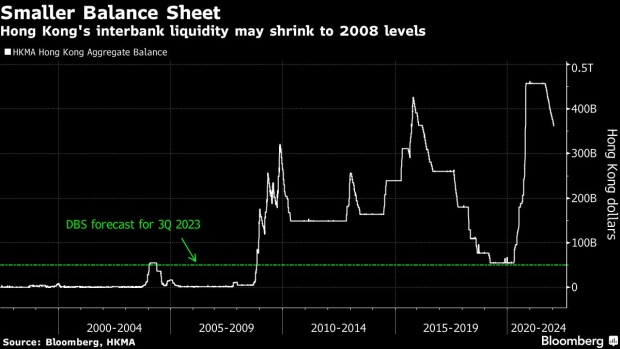 (Bloomberg) -- The last thing Hong Kong wants to do right now is increase borrowing costs. But that’s exactly what it will be forced to do when the Federal Reserve starts lifting interest rates.

Hong Kong’s $344 billion economy is under strain as extreme zero-Covid policies keep the city isolated and a slowdown in China clouds the outlook for corporate earnings. Its stock market was the world’s worst performing last year due to Beijing’s crackdowns on industries such as tech, property and casinos. Making matters worse, concern over closed borders and growing Communist Party influence is spurring a brain drain.

Hong Kong imports U.S. monetary policies due to a linked exchange rate with the greenback, even though its economy is increasingly reliant on China. To protect the stability of its pegged currency, the local monetary authority has been tightening liquidity in the financial system.

“At a time when China’s growth slowdown is already exerting a drag, a tighter Fed policy will lead to increased market volatility and capital outflow pressures -- potentially a double whammy for the Hong Kong economy,” said Lloyd Chan, an economist at Oxford Economics Ltd.

Economists are reviewing their outlooks for the city. Last week, the International Monetary Fund said the balance of risks facing Hong Kong’s economy are tilted to the downside. DBS Group Holdings Ltd. cut its prediction for growth this year to 2.4% from 3%, citing the government’s zero-Covid policies and an “alarming” drop in the labor force as more residents depart for good.

Money markets have almost fully priced in a 25-basis-point rate hike by the Fed in March and are wagering on a total of four such increases in 2022.

As U.S. rates rise, so too will the HKMA’s base rate. Local lenders will not necessarily follow suit immediately. During the last Fed hiking cycle that ran into 2018, Hong Kong’s market rates lagged the increase in the base rate.

Buffers for Hong Kong include huge amounts of interbank liquidity already in the system that will ease upward pressure on rates, according to Aries Kin-Ming Wong, an expert on Hong Kong’s economy and monetary policy at Hong Kong Baptist University.

“Fed rate hikes may not necessarily lead to a significant increase in interest rates here in Hong Kong, in the near term,” Wong said. “The lending rates can move up later with smaller steps in view of the limited pressure from capital outflows and very abundant interbank liquidity.”

Hong Kong’s dollar peg and reliance on imports from the mainland may reduce inflationary pressure, while easing by the People’s Bank of China may offset the market impact from the Fed’s tightening, according to Bruce Pang, head of macro and strategy research at China Renaissance Securities Hong Kong Ltd.

The PBOC is widely expected to cut policy interest rates again in the coming months, including its one-year medium-term lending facility rate and the seven-day reverse repurchase rate, as well as reduce the reserve requirement ratio for lenders. The central bank cut three of its policy rates in January.

“The city could be better placed than many economies to be able to resist some of the pressures from upward dollar-denominated prices,” said Pang. “PBOC easing will be an upside catalyst for the Hong Kong market, which has a high proportion of Chinese-listed companies.”

Yet Hong Kong’s open capital borders mean the city is vulnerable to funds moving in and out. While plentiful liquidity can help put a floor on prices when sentiment sours, the reverse has been happening in recent months. The Hong Kong Monetary Authority has accelerated the issuance of Exchange Fund Bills, thereby mopping up cash in the banking system.

“We think an upward adjustment of HIBOR-linked mortgage rates will push up the mortgage burden for households, with highly leveraged borrowers particularly vulnerable,” Oxford Economics’ Chan said. “This can have an impact on consumer spending.”