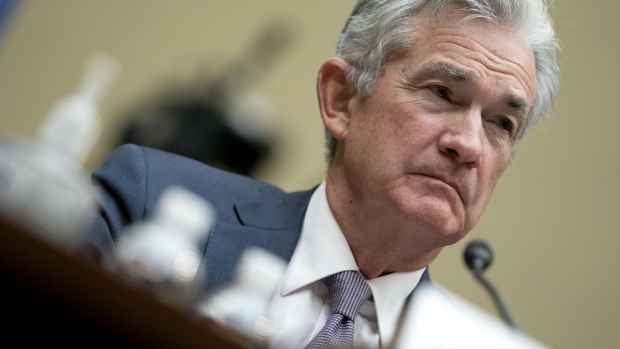 A parade of Federal Reserve officials Wednesday stressed that more fiscal stimulus is critical to sustaining the economic recovery, and U.S. stocks tumbled as pessimism began sinking in that Congress would ever deliver a new aid package.

Chairman Jerome Powell continued to wave the fiscal flag carefully at a congressional hearing -- amid a political stalemate -- saying that more support was likely to be necessary. Others were more full-throated, with Cleveland Fed President Loretta Mester saying it was very much needed given the “deep hole” the economy is climbing out of.

Chicago Fed President Charles Evans expressed concern the stimulus he penciled in won’t be forthcoming, while Boston Fed President Eric Rosengren suggested it’ll take another wave of infections to prompt action, and likely not until next year.
Stocks Slide

The S&P 500 fell 2.4 per cent, the biggest drop since Sept. 8 and the fifth decrease in six days, a sign that investors are becoming more downbeat on prospects for stimulus once seen as a near-certainty. Rates markets showed traders were easing up on inflation bets, a sign of pessimism that the Fed alone won’t be able to bring price gains to its 2 per cent goal in coming years.

Declines in the stock market, until recently attributed to a reversal of excessive tech-share gains, have increasingly been ascribed in part to worries about the recovery and the need for more stimulus.

Democrats and Republicans have been at loggerheads over another virus relief package, with no formal negotiations since early August. Chances of aid faded further after Friday’s death of Justice Ruth Bader Ginsburg put the fight over a Supreme Court seat at center stage, moving stimulus talks to the background.

The drop in stocks hasn’t yet been as pronounced as during the financial crisis in September 2008, when Congress’s rejection of bailout funds spurred the sharpest decline in two decades -- leading lawmakers to walk back the rejection.

“The Fed wants to put maximum pressure on Congress to re-up fiscal support given the limits to monetary policy in dealing with the severe and asymmetric virus shock amid fears of a new fall wave,” Evercore ISI analysts Krishna Guha and Ernie Tedeschi wrote in a note Wednesday.

At the same time, Fed policy makers need to be careful not to shake confidence that they still have ammunition they can use, they wrote.

“The most difficult part of the recovery is still ahead of us,” Rosengren said. He said he was more pessimistic than his colleagues over how many Americans will return to work over the next 15 months.

The Boston Fed chief raised particular concern over “disturbing” signs in commercial real estate. The sector saw risky behavior before the pandemic and is now being hit by the coronavirus’s impact on everything from hotels to strip malls, he said.

Like Powell, Fed Vice Chair Richard Clarida, in an interview on Bloomberg Television, emphasized the recovery has so far been stronger than officials predicted a few months ago. He also made clear the road ahead will be difficult and repeated the theme that fiscal support would help.

“The economy is recovering robustly, but we are still in a deep hole,” he said. “Long term, the U.S. needs to get back on a sustainable fiscal path, but you don’t want to start that in the midst of the worst economic hit in 90 years.”

In new economic forecasts released Sept. 16, Fed officials had a median projection for unemployment at 7.6 per cent next quarter, down from the 8.4 per cent recorded in August, with a further drop to 5.5 per cent at the end of 2021.

Rosengren said his own projections were “less optimistic.” Evans noted that his own forecast incorporated an expectation of US$1 trillion of further fiscal support.

Atlanta Fed President Raphael Bostic said in a virtual speech to an Alabama chamber of commerce that he’s “hopeful that policy makers in Washington as well as at the state level find creative ways to get that support out there.”

“With relief running out there is a pretty significant chance that some of the temporary disruption and dislocation can become permanent,” Bostic said. “That just means the hurdle that we have to climb is going to be that much higher.”

--With assistance from Matthew Boesler, Edward Bolingbroke and Steve Matthews.