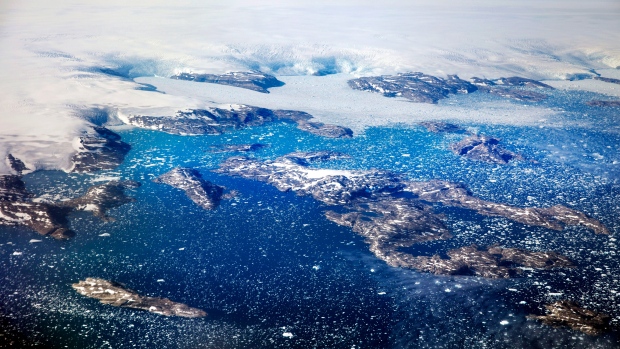 In this Aug. 3, 2017 file photo, icebergs float in a fjord after calving off from glaciers on the Greenland ice sheet in southeastern Greenland. , The Canadian Press

Climate change is becoming increasingly relevant to central bankers because losses from natural disasters that are magnified by higher temperatures and elevated sea levels could spark a financial crisis, a Federal Reserve Bank of San Francisco researcher found.

“There could also be direct effects in the form of larger and more frequent macroeconomic shocks associated with the infrastructure damage, agricultural losses, and commodity price spikes caused by the droughts, floods, and hurricanes amplified by climate change,’’ according to Rudebusch, who is also a senior policy adviser at the reserve bank.

While the Fed’s primary policy tools -- short-term interest rates and large-scale asset purchases -- aren’t designed to address phenomenon like global warming, policy makers may need to take climate-related damages into account when considering the long-term economic outlook, the researcher wrote. “Many central banks already include climate change in their assessments of future economic and financial risks when setting monetary and financial supervisory policy,” he wrote.

Fed Chairman Jerome Powell told legislators in February it was a “fair question’’ to ask how the central bank would evaluate the economic impact of climate change and promised to look into it.

Rudebusch, whose bank operates as part of the Fed system but isn’t directed by Powell, suggested lawmakers could promote a transition to cleaner technologies by imposing a carbon tax, which is a fee on emissions. Former Fed chairmen Alan Greenspan and Paul Volcker in January endorsed a plan to tax emissions and distribute the revenue to U.S. households.

Some pressure is mounting in Congress to take aim at climate change, with House Speaker Nancy Pelosi pledging to take up climate legislation. That effort may not go far in the current political environment, as Republicans control the Senate and the White House. President Donald Trump said during the campaign he opposed taxing emissions and has expressed skepticism that humans contribute to global warming.