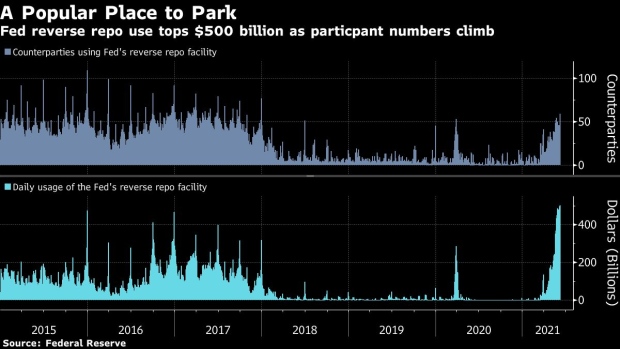 (Bloomberg) -- Demand for a key Federal Reserve facility used to help control short-term rates surged to more than half a trillion dollars for the first time ever, accommodating a barrage of cash in search of a home.

Fifty-nine participants on Wednesday parked a total of $502.9 billion at the overnight reverse repurchase facility, in which counterparties like money-market funds can place cash with the central bank. That surpassed the previous record volume of $497.4 billion from Tuesday, New York Fed data show.

Even though the offering rate on the Fed facility is 0%, demand has been increasing as a flood of cash overwhelms U.S. dollar funding markets. That’s in part a result of central-bank asset purchases and drawdowns of the Treasury General Account, which is pushing reserves into the system. At the same time, regulatory constraints are also spurring banks to turn away deposits and direct that cash to money-market funds.

“Without any of the changes, such as easing of regulatory constraints, balance sheet expansion and the ongoing TGA drawdown through late July will continue to push cash into the RRP facility,” said Credit Suisse strategist Jonathan Cohn, who said take-up at the facility could double with another $840 billion of quantitative easing by year-end.

The massive buildup of dollars in the funding market is also adding fuel to the debate about whether or not policy makers need to make adjustments to their so-called administered rates -- interest on excess reserves and the RRP facility’s offering yield -- in order to pull short-term rates off of zero. In the minutes of the latest Fed gathering released last month, the System Open Market Account manager noted that downward pressure on overnight rates in coming months could result in conditions that warrant consideration of a modest adjustment to those rates.

Given the cash glut seen in funding markets and near-zero rates in the front-end, investors have started to drift out the curve in search of more yield as evidenced by the rally in Treasuries and the strong indirect bids at this week’s three- and 10-year auctions.