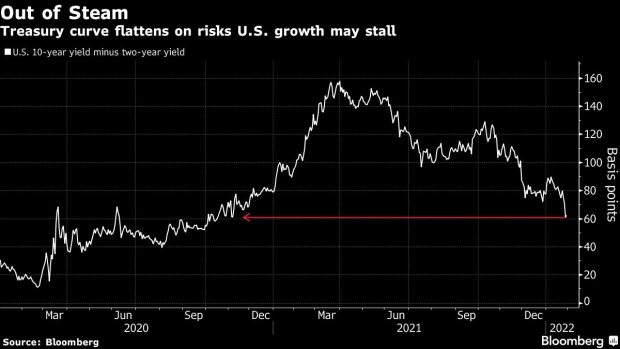 Hiking rates aggressively risks undercutting the recovery in the business cycle while the labor market is still healing from pandemic disruptions, according to Scott Thiel. Fed Chair Jerome Powell wrapped up a two-day policy meeting this week by endorsing interest-rate liftoff in March and opening the door to more frequent and potentially larger hikes than anticipated.

“This is a restart, not a recovery, and the economy will slow down more quickly as we get back to potential,” Thiel said in emailed comments. “What’s more, the primary driver of inflation is constrained supply, not an overheating economy. The risk of a policy mistake and over-tightening is increasing.”

BlackRock Investment Institute strategists said last week that central banks cannot stabilize both inflation and growth at the same time, which means the developed world should learn to live with elevated inflation for now.

To some, the U.S. Treasury yield curve, a gauge of economic health, is already flashing a warning sign on growth. The spread between 2- and 10-year notes has narrowed to 61 basis points this week, the least since October 2020. Meanwhile forward U.S. overnight swap rates show a peak in 18 months to two years’ time, before declining slightly -- suggesting a belief among a cohort of traders that the Fed will eventually need to ease policy.

The market has priced in almost five interest-rate increases from the Fed this year; Bloomberg Economics warns of an upside risk for six. A few months ago, the first rate hike wasn’t even expected until 2023.

Thiel projects the rate-hike cycle will end when the terminal fed funds rate is around 2%. That suggests seven increases of 25 basis points each.

The firm continues to have a bearish outlook on bonds and is calling for negative returns as price pressures accelerate and the safety of owning longer-term government bonds at historically low yields is called into question. Thiel reiterated the firm’s positive view on equities.

Powell’s remarks that conditions in the labor market are consistent with maximum employment caught Thiel’s attention. In December, Powell said that the Fed would keep rates near zero until full employment had been reached. He, along with some of his colleagues, have said repeatedly that they’re seeking a “broad-based and inclusive” labor market recovery.

While the Fed hasn’t explicitly spelled out how it defines maximum employment, current labor market data suggest that the measurement is based on broad statistics rather than individual demographic categories.

“In recent months, the Fed has effectively redefined full employment and from the meeting, it is clear that the Fed intends to ‘normalize’ faster,” said Thiel. “The Fed seems to be downplaying the broad and inclusive labor market objective. This only adds to the possibility of a policy mistake.”