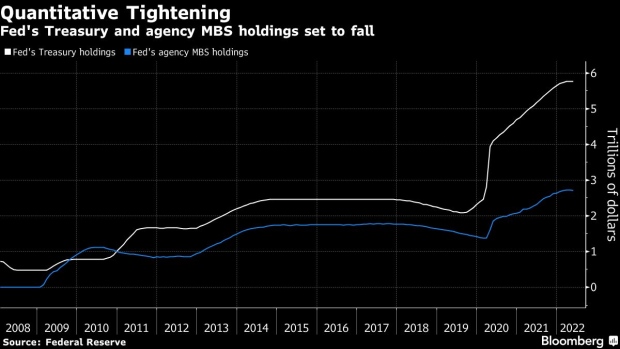 (Bloomberg) -- The Treasuries market is girding for potential disruptions from the next and trickiest stage of policy makers’ tightening campaign: the shrinking of an $8.5 trillion bond portfolio.

With the Federal Reserve releasing minutes from its latest meeting on Wednesday, traders are looking for further details on the plans to let billions of dollars worth of bonds to mature each month without replacing them.

Already roiled by the steepest trajectory of Federal Reserve interest-rate increases in decades, investors are now readying for what’s known as quantitative tightening, or QT. Fed Chair Jerome Powell himself cautioned earlier this month that the process -- seen as secondary to rate hikes -- has an element of uncertainty around it.

“It’s actually because QT is supposed to run in the background that makes it more dangerous,” said Priya Misra, global head of rates strategy at TD Securities. By sending inflation-adjusted yields higher, it will strengthen tightening in US financial conditions and slow the economy, she said.

Powell described QT as having an “important role” in firming monetary policy and said it will help return financial conditions to a “more neutral” calibration. Market participants have outlined multiple areas of possible stress as that happens. The following are among them:

It may push up longer-term rates, as Misra outlines. Ten-year Treasury yields were around 2.72% Tuesday, up from 1.51% at the end of last year, and earlier this month reached as high as 3.20%, a level unseen since 2018.

While some consider yields to have already peaked, the impact of QT could be difficult to gauge. The Fed is going to be shrinking its portfolio much faster than during its one previous episode, in 2017-19. Three months after the June 1 start, the Fed will allow up to $95 billion of securities mature each month, compared with the $50 billion maximum runoff last time.

Giving officials some confidence to move faster is a safety net set up last year. The standing repo facility (SRF) gives market players a window where they can get cash in exchange for parking Treasuries. The idea is it could help prevent a repeat of the repo-market turmoil of 2019, when rates in that critical corner of the financial system soared amid a seize-up in lending.

“Maybe the size of the balance sheet doesn’t have to be as large” given the SRF, Federal Reserve Bank of Chicago President Charles Evans said in an interview on May 18 at Bloomberg’s New York headquarters. But “I cannot tell you how this will actually work out. I just don’t know how the standing repo facility will work.”

Some worry QT could exacerbate already-strained trading conditions. Big US banks have for years refrained from adding market-making capacity in Treasuries, thanks in part to capital requirements involved. That’s contributed to sharp, sudden moves in yields. Starting next month, the Fed will now be shrinking its participation in buying auctions, and have less to lend out to others.

While the Treasury Department is leading an effort to address trading conditions, no detailed plan has yet emerged. It seems regulators “thought they had more time to address it before QT started,” Wessel said.

Fed QT this time around has a notably different global backdrop. The European Central Bank along with most other major Fed peers are joining the US in tightening -- suggesting less global demand for bonds, in another potential push higher for yields.

“When you consider what is going to happen to the 10-year US Treasury yield you have to also realize that it doesn’t happen in isolation to what happening globally,” said Zachary Griffiths, strategist at Wells Fargo Securities. “Last time around in Fed QT, there was a ton of buying going on by other central bank banks,” but that’s not the case now, he said.

A further area of concern for some: outright sales from the Fed’s mortgage-backed securities portfolio. Powell noted earlier this month it’s likely that the amount of maturing MBS will be less than the Fed’s monthly cap. That opens the potential for sales, if policy makers so decide.

MBS sales would make QT “super-charged,” in the view of Misra at TD.

It would be a surprise move that markets haven’t priced in at the moment, said Jeana Curro, head of agency MBS research at Bank of America Corp., who expects the Fed to start selling MBS holdings next year.

Ankur Mehta, head of global securitized research at Citigroup Inc., sees sales starting as early as the fourth quarter, citing the potential for the Fed seeking to return to a Treasury-only portfolio much faster than a gradual reduction of MBS would allow.

Bottom line for Deutsche Bank’s Wessel: there are “way more unknowns” about QT this time.