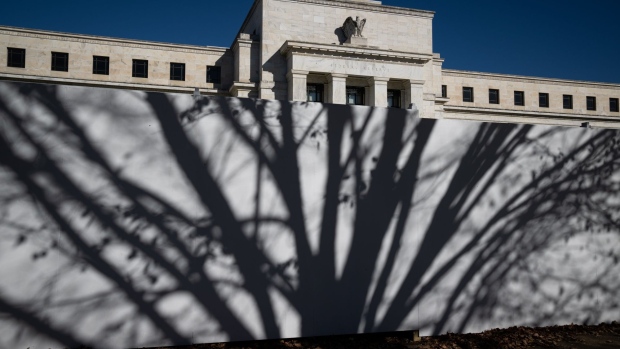 The Marriner S. Eccles Federal Reserve building in Washington, DC, US, on Wednesday, Nov. 9, 2022. The Republican wave that was supposed to undo Joe Biden's presidency failed to arrive as GOP candidates were projected to dominate Tuesday's midterm elections, with polls showing voters bitter about the state of the economy. Photographer: Graeme Sloan/Bloomberg , Bloomberg

(Bloomberg) -- Federal Reserve Bank of Richmond President Thomas Barkin said he favored slowing the pace of interest rate hikes in recognition of past aggressive moves, while adding that the peak of rates may need to be held for longer at potentially higher levels to dampen inflation.

“I’m very supportive of a path that is slower, probably longer and potentially higher than where we were before,” Barkin said in an interview Monday with Kathleen Hays on Bloomberg Television. He added that he expects peak rates “certainly” to be higher than he thought a couple months ago.

Fed officials have signaled they plan to raise their benchmark rate by 50 basis points at their final meeting of the year on Dec. 13-14, after four successive 75 basis-point hikes. But policy makers could also raise their forecasts for how high interest rates will eventually go when they update their economic projections during the meeting in the face of persistently high inflation.

Barkin is the latest Fed official to endorse additional tightening to reduce inflation near a 40-year high. New York Fed President John Williams said earlier Monday that higher inflation would call for a “modestly higher path for policy” and St. Louis Fed President James Bullard separately said financial markets were “underpricing” the likelihood that the Fed would need to be more aggressive.

Barkin said slowing rates makes sense as monetary policy can work with long lags, so it becomes more challenging to calibrate the moves to get the desired results.

“It is helpful to be somewhat more cautious as you are in restrictive territory,”  he said. “It is a better risk-management approach.”

At the same time, Barkin added that incoming data would help guide his view of where rates go, while declining to make a specific forecast.

“Inflation has been stubborner than I would like,” he said. “As long as inflation stays elevated, that makes the case to me that we need to do more.”

Minutes from the Fed’s Nov. 1-2 gathering showed widespread support among officials for calibrating their moves, with a “substantial majority” agreeing it would soon time to slow the pace of rate increases.

But views around how high they will eventually need to lift borrowing costs was less clear, with “various” policymakers seeing a case for going somewhat higher than previously expected.

Investors expect rates to peak around 5% next year from a current target range of 3.75% to 4%, according to pricing of contracts in futures markets.

While the Fed has sought to reduce U.S. growth to below trend as a way to douse inflationary pressures and cool a labor market they view as overheated, the economy has remained resilient.

Policymakers will get a fresh read on employment on Friday, with economists polled by Bloomberg looking for payroll additions of around 200,00 in November and unemployment expected to stay at 3.7%.