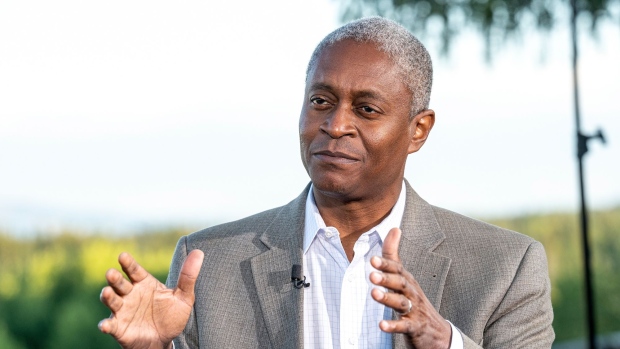 (Bloomberg) -- Federal Reserve Bank of Atlanta President Raphael Bostic said he backs raising rates by a further 1.25 percentage points by the end of this year to counter inflation that has been worse than he expected.

“The lack of progress thus far has me thinking much more now that we have to get to a moderately restrictive stance,” he told reporters Wednesday via a telephone conference call. “And for me, that is in the 4.25% to 4.5% range for our policy. My preference is that we get there by year end.”

Fed officials raised interest rates by 75 basis points on Sept. 21 for the third straight meeting, bringing the target for the benchmark federal funds rate to a range of 3% to 3.25%. Median projections show officials forecast that rates would reach 4.4% by the end of this year.

“Inflation is still high and too high and not moving with enough speed back down to our 2% target,” Bostic said, adding that at the start of the summer he had expected to see an improvement in supply-chain imbalances that would help to ease price pressures.

“But that has not come in as strongly as expected and it’s caused me to really adjust my policy thinking,” he said.

Chair Jerome Powell and his colleagues are raising rates aggressively to tackle the highest inflation in nearly 40 years and have stressed that they won’t flinch from the task even if it causes pain to US workers and businesses.

That hawkish message has roiled financial markets globally. Bostic said that officials were not ignoring what was going on in the rest of the world. Turbulence in the UK, Russia’s invasion of Ukraine and issues in China are all of concern, he said.

“We’ve got a lot geopolitical uncertainty more broadly, and so we’re definitely going to have to be mindful of those things.”

Bostic said his forecast is for another 75 basis-point hike at the Fed’s November meeting followed by 50 basis points in December, adding it’s contingent on the incoming data.  He also said he would like to stop rate hikes before inflation hits the 2% goal to avoid overtightening.

“I don’t think it’ll be appropriate for us to continue to tighten and increase your rates until inflation gets to 2%,” Bostic said. “That will be guaranteeing that we’ve gone too far and we’ll take the economy into a negative space.”

The Atlanta Fed chief said he remains hopeful that the U.S. economy can avoid a recession or much higher unemployment. He said he has forecast that unemployment will rise to about 4.1% from 3.7% -- a small increase that would still represent a strong labor market.

“I’m still in the place of not really thinking that a recession is a foregone conclusion as we battle this,” he said. “So we can have some weakening, but I don’t think it, at this point, will take us to the historical recessionary experience.”