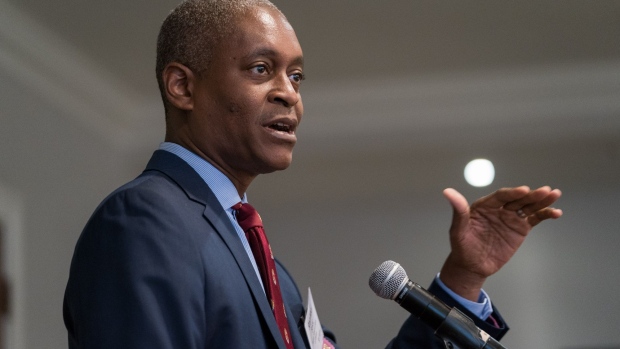 “Widespread permanent job loss could become a material risk to the recovery,” Bostic said Monday in prepared remarks to the Securities Industry and Financial Markets Association. “The data on this are clear: permanently laid off workers find it far more difficult to rejoin the labor force. This would make recovery more difficult to sustain.”

Bostic as well as other Fed officials have called for more fiscal support for the recovery from the pandemic-induced recession. While the U.S. continues to add jobs, the number of permanent job losers rose by 345,000 last month to a seven-year high of 3.8 million, while the number of Americans on temporary layoff fell by 1.5 million to 4.6 million.

At the rate of recovery in September, the U.S. wouldn’t return to pre-Covid employment levels until December 2021, Bostic said. Moreover, job losses have been concentrated among women and minorities in services occupations, so that disparity is bringing increased inequality, he said.

“An unnecessarily slow labor market rebound could just drive historic wedges deeper, continuing to exacerbate the geographic, racial, gender, and income disparities in our economy,” Bostic said. “The people who are often least equipped to weather a prolonged bout of unemployment are bearing the brunt of this health crisis and economic downturn. ‘’

Bostic said he agrees with the Fed’s current policy of interest rates near zero, adding the central bank could tinker with some of its lending facilities to make them more available to those in need. But there are limits to what a central bank can do, he said.

“Fiscal policymakers clearly have a significant role to play in ensuring that the economic disruptions don’t become deeply rooted, that the wedge does not continue to widen these disparities,” Bostic said.