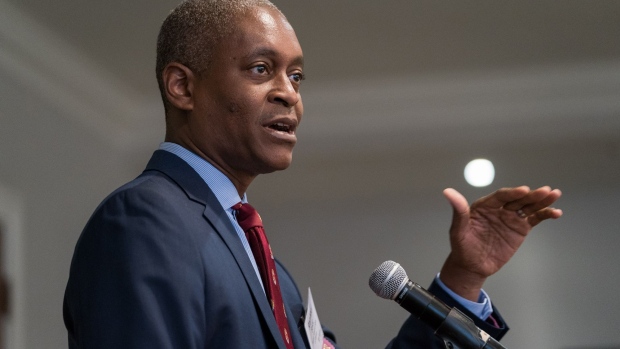 Raphael Bostic, president and chief executive officer of the Federal Reserve Bank of Atlanta, speaks to members of the Harvard Business School Club of Atlanta at the Buckhead Club in Atlanta, Georgia, U.S., on Wednesday, Feb. 19, 2020. Bostic said he's not seeing risk levels rising to a point that they would be a "source of concern." , Photographer: Elijah Nouvelage/Bloomberg

(Bloomberg) -- Federal Reserve Bank of Atlanta President Raphael Bostic said it was important to get inflation under control but policy makers should not act with such vigor that they harm the economy, especially with a weaker global outlook.

“This is one reason why I am reluctant to really declare that I want to go a long way beyond our neutral place because that may be more hikes than are warranted given the economic environment,” he said Tuesday in an interview on CNBC television. “That’s just a sign that we definitely need to be cautious as we move forward.”

The neutral rate refers to the level that neither speeds up nor slows down the economy.

Fed officials raised their benchmark rate by a quarter-percentage point last month after keeping it pinned near zero for the previous two years to help the economy recover from the impact of the pandemic.

Now, they are signaling a relatively-rapid pace of rate increases over the rest of the year to get their benchmark rate to what they deem to be a “neutral” level of 2.25-2.5%, and are increasingly suggesting they may have to go even higher.

“I’m kind of uncomfortable to declare with that much certainty that I know exactly what’s going to happen such that I can tell you exactly how fast or when we should get exactly to neutral or even if we should go beyond it,” Bostic said.

Asked if he agreed with remarks by St. Louis Fed chief James Bullard that a 75 basis point increase may be needed if inflation fails to cool as expected, Bostic said “Any action is actually possible, although it’s not something that’s really on my radar right now.”