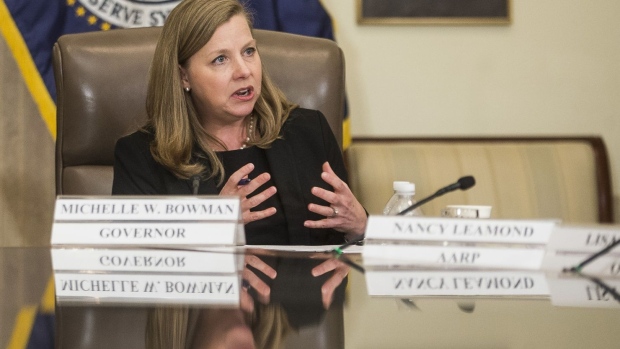 (Bloomberg) -- Federal Reserve Governor Michelle Bowman said demand for workers remains strong, but constraints ranging from child care to benefits are limiting the supply of people who can or want to take the jobs.

Payroll gains are strong and unemployment rates are low -- “the kind of labor market that historically has pulled in more workers,” Bowman said Wednesday.

“One complication is that the future of labor supply is uncertain, and it is difficult to predict how labor force participation will evolve,” she said in prepared remarks for a meeting of the Arkansas Women’s Commission in Russellville.

The Fed has aggressively raised interest rates this year, including back-to-back 75-basis-point hikes at its past two meetings, in an effort to drive down 40-year-high inflation. Fed leaders have argued that the labor market is healthy enough to withstand the tightening measures, and have indicated that they will continue to raise rates this year.

High prices may spur workers to return to the labor force, Bowman said.

Bowman’s remarks were released shortly after minutes from the July Fed policy meeting, which showed officials judged it would eventually be appropriate to slow the pace of interest-rate increases. She didn’t discuss borrowing costs in her speech.

In remarks focused on women, Bowman noted that female employment has recovered from steep losses during the depths of the Covid-19 crisis. But there are still barriers that prevent some women from returning to work, including child and elder care, as well a disproportionate representation in high-contact jobs with exposure to the virus, Bowman said.

Bowman, a community banker appointed to the Fed by President Donald Trump, criticized government support programs, including supplemental unemployment insurance, for weighing on people’s willingness to return to work.

“There is no magic wand that will draw workers back into the labor force, especially when generous government benefits programs are provided,” Bowman said.

Programs to assist workers in finding jobs, including training efforts, and private-sector employment subsidies can help bring workers back, she said.

Bowman, a mother herself, spoke at length about the disproportionate amount of time women spend on child care, compared with men. It’s particularly true for those with young children, she said.

Challenges in securing child care are holding many families back from returning to the workforce, Bowman said.

Employment in the child-care industry, which slumped 36% at the onset of the pandemic, is still short about 88,000 workers from its prepandemic level.

High rates of college graduation among women, though, will help insulate them in future downturns, Bowman said.

(Updates with more details from speech starting in second paragraph.)