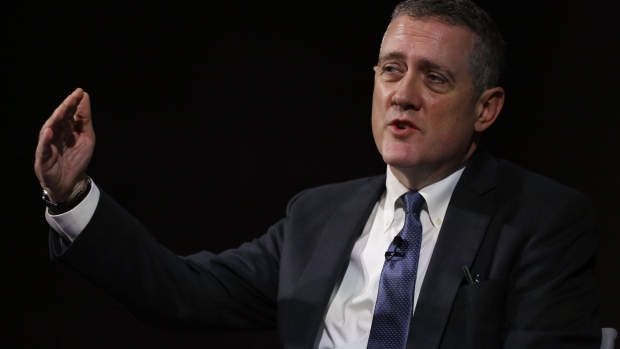 (Bloomberg) -- Federal Reserve Bank of St. Louis President James Bullard said the central bank should front-load an aggressive series of interest-rate hikes to push rates to 3.5% at year’s end, which if successful would push down inflation and could lead to policy easing in 2023 or 2024.

“I have also said we should get to 3.5% by the end of the year, which is higher than some of my colleagues,” Bullard said in a Fox Business interview Friday. “The more we can front-load and the more we can get inflation and inflation expectations under control, the better off we will be. In out years -- ‘23 and ‘24 -- we could be lowering the policy rate because we got inflation under control.”

Bullard, who’s been the most hawkish among policy makers this year, repeated he supported Fed Chair Jerome Powell’s plan to raise rates by a half point at the Federal Open Market Committee meetings in June and July as part of an effort to cool inflation running at its hottest since the 1980s. Asked about a 75 basis-point hike, Bullard said that couldn’t be ruled out as an option.

“We have to get inflation under control, and I think we have a good plan to do so,” Bullard said. “Fifty basis points is a good plan for now. As always, we have to pay attention to incoming data on the economy and on inflation. You can never make ironclad promises in this business, but we will see how this goes.”

Bullard said the decline in the US stock market wasn’t surprising and was in part a response to higher interest rates. The market sank further Friday and briefly entered a bear market, defined generally as a 20% drop. The Nasdaq index, dominated by technology stocks, is off 29% this year.

“There has been a lot of repricing in markets,” Bullard said. “Part of that is due to the Fed, but part of it might also be what were the prices before the downturn occurred. You would expect with the Fed raising rates that all these assets, trillions of dollars worldwide, would have to be repriced.”

Unlike much of Wall Street, Bullard said the likelihood of a recession is low. The overall economy is likely to steam ahead, with growth in gross domestic product of 2.5% to 3% and the unemployment rate possibly falling below 3% by year’s end. Growth is likely to be supported by strong consumption as Americans start to travel and experience more following the Covid-19 pandemic, he said.