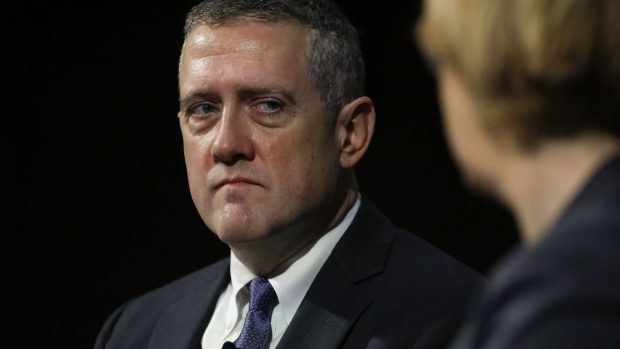 James Bullard, president and chief executive officer of the Federal Reserve Bank of St. Louis, pauses during an interview at the 2019 Monetary and Financial Policy Conference at Bloomberg's European headquarters in London, U.K., on Tuesday, Oct. 15, 2019. Bullard said U.S. policy makers are facing too-low rates of inflation and the risk of a greater-than-expected slowdown, suggesting he’d favor an additional interest rate cut as insurance. , Bloomberg

(Bloomberg) -- Federal Reserve Bank of St. Louis President James Bullard said fears of a US recession are overblown, as consumers are flush with cash built up during the Covid-19 pandemic and the expansion is in an early stage.

“I actually think we will be fine,” Bullard said in a speech in Zurich Friday. “It is a little early to have this debate about recession probabilities in the US.”

Bullard repeated his call for further “front-loading” of rate hikes to contain inflation. The Federal Open Market Committee raised interest rates by 75 basis points last week and Fed Chair Jerome Powell indicated that either another move of that size, or of half a percentage point, will be on the table when policy makers meet again in late July.

While a growing number of economists have started to predict a US recession, Bullard said “this is in the early stages of the US recovery -- or US expansion, we are beyond recovery. It would be unusual to go back into recession at this stage.“

“Interest-rate increases will slow down the economy but will probably slow down to more of a trend pace of growth as opposed to going below trend,” he added in the panel discussion hosted by UBS. “I don’t think this is a huge slowing. I think it is a moderate slowing in the economy.”

Bullard said households, which account for around 70% of the U.S. economy, are continuing to spend, bolstered by savings built up during the pandemic as well as housing wealth.

“Households seem to be in great position to spend going forward,” he said. “They are flush. They have still $3.5 trillion of kind of Covid aid that is more or less unspent” which is “something on the order of 10% of GDP still sitting in people’s bank accounts.”

The labor market “is very strong,” with about two job openings for every unemployed worker, Bullard said, and nonfarm payrolls are running at a pace higher than normal. “It just doesn’t seem from the household side like you’d be in imminent stages of households pulling back meaningfully.”

Bullard didn’t specifically address the July meeting in his comments, though has been among the most hawkish of Fed officials.

Fed leaders seem to be lining up in favor of 75 basis points, with Fed Governor Michelle Bowman Thursday saying she backed raising rates by 75 basis points next month and continuing with hikes of at least 50 basis points after that until price pressures cooled. Governor Christopher Waller on Saturday said that he would support another 75 basis point move in July.

Powell and his colleagues have pivoted aggressively to fight the hottest inflation in 40 years amid criticism that they left monetary policy too easy for too long as the economy recovered from Covid-19. They’ve raised rates by 1.5 percentage points this year and officials forecast about 1.75 points of further cumulative tightening in 2022.

Bullard, 61, president of the St. Louis bank since 2008, has pushed earlier than others for the central bank to pivot to aggressively fighting inflation, with the committee swinging to embrace that view over time.