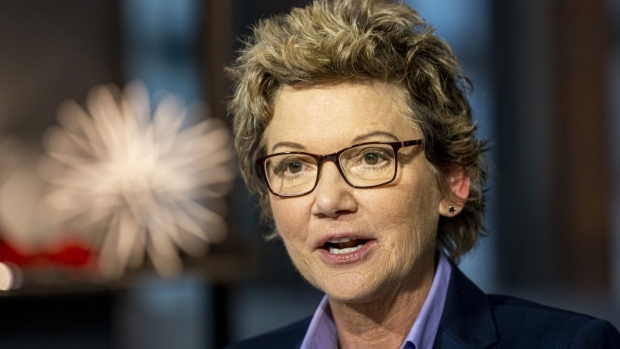 (Bloomberg) -- Federal Reserve Bank of San Francisco President Mary Daly said the central bank should raise interest rates “a little” above 3% by the end of the year to cool inflation, pushing back against investor bets that officials would then reverse course.

“We need to get the rate up, up to neutral at least, which is around 3%, but likely to restrictive territory -- a little bit above 3% this year and a little bit more above 3% next year,” she told CNN International in an interview on Thursday. “I really think of the raise-and-hold strategy as one that has historically paid off for us.”

The Fed raised rates by three quarters of a percentage point in July to a range of 2.25% to 2.5%, following a similar-sized hike at the June meeting and smaller increases earlier this year, in an effort to cool price pressures that are at a 40-year high. In all, policy makers saw the federal funds rate reaching 3.4% this year, according to the median estimate of their June projections.

The San Francisco Fed leader, who doesn’t vote on policy this year, said either a 50- or 75-basis-point increase would be appropriate at the Fed’s meeting next month, depending on incoming data. On Aug. 11, she said her base case is for a half-percentage point hike in September, but said she has an “open mind” about another large increase being necessary.

“We have a lot of work to do at the Fed to bring us back to price stability,” she said Thursday. “We want to not to have this idea that we will have this large, hump-shaped rate path where we will ratchet up really rapidly this year and then cut aggressively next year.”

Pricing in interest-rate futures shows investors betting the Fed will ease policy by about 40 basis points over the course of 2023 after rates peak at 3.65%.

Daly spoke a day after the release of minutes from the July Fed policy meeting, which showed officials judged it would eventually be appropriate to slow the pace of interest-rate increases, with some advocating the Fed then put policy on hold for some time.

Fed officials who have spoken since the July meeting have pushed back against any perception that they’d be pivoting away from tightening any time soon. They’ve made it clear that curbing the hottest inflation in four decades is their top priority.

The July jobs data, published by the Labor Department on Aug. 5, showed companies added 528,000 employees to payrolls last month, more than double what forecasters were expecting, and the unemployment rate ticked down to 3.5%, matching the pre-pandemic low.

But the department’s Aug. 10 readout on consumer prices showed they rose 8.5% in the 12 months through July, down from the 9.1% increase in the year to June that had marked the highest inflation rate since 1981.

August numbers on jobs and consumer prices are due out before the September meeting, and will probably be critical in shaping market expectations ahead of that decision. Officials also have a chance to discuss their latest outlooks when they gather Aug. 25-27 for their annual policy retreat in Jackson Hole, Wyoming.