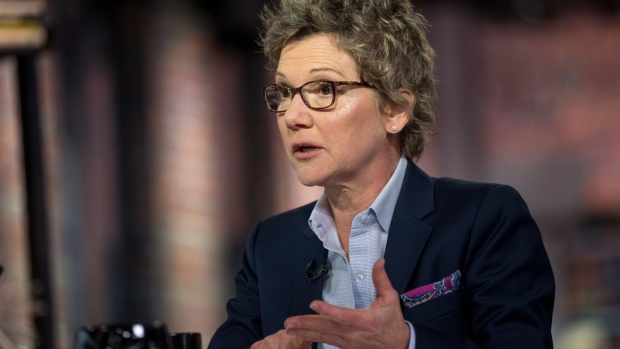 Mary Daly, president of the Federal Reserve Bank of San Francisco, speaks during a Bloomberg Television interview in San Francisco, California, U.S., on Wednesday, Nov. 13, 2019. Daly said that monetary is in a good place given healthy momentum in the economy and consumer spending, despite headwinds from weaker business investment and manufacturing. , Bloomberg

(Bloomberg) -- The U.S. central bank should not prematurely withdraw pandemic support for the U.S. economy just because some people are getting rich in the stock market, said San Francisco Federal Reserve Bank President Mary Daly.

“We’re building this bridge, which is barely having many communities hang on, and the stock market is running pretty good and many people who already have money are getting more money,” she said Friday during a virtual discussion hosted by the Stanford Graduate School of Business.

“I am not willing to pull that bridge away and injure, in my judgment, the livelihoods of people -- because they don’t have jobs, they don’t have income, they don’t have wage growth -- simply to ensure that some people who already have stock market wealth don’t get more.”

Daly, who votes on monetary policy this year, was asked to comment on the frenzy around GameStop Corp.’s meteoric stock-price rise. Some people have blamed the central bank’s ultra-easy policy for fanning a bubble in financial markets, but policy makers have shown no inclination so far to step back.

The Fed held interest rates near zero at its meeting this week and repeated an assurance it would continue its massive monetary assistance for some time to come. Fed Chair Jerome Powell, who was also asked about excessive market speculation, sidestepped several attempts to get him to comment directly on GameStop, saying instead that financial-stability vulnerabilities overall are “moderate.”