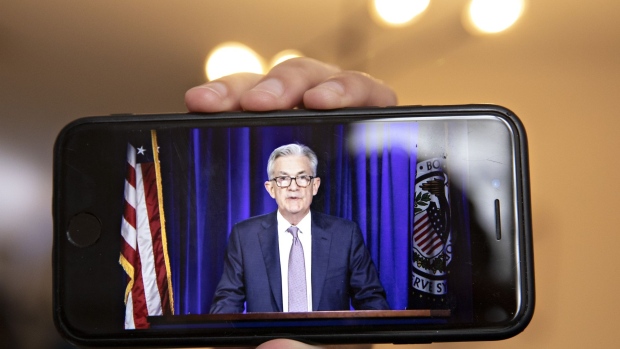 (Bloomberg Opinion) -- Last week’s public spat between Treasury Secretary Steven Mnuchin and Federal Reserve Chair Jerome Powell may have set an end date for the central bank’s unprecedented intervention in U.S. credit markets. But make no mistake, the legacy of this episode will most likely permanently change investors’ mindset during periods of crisis.

In particular, the Fed’s swift purchases of corporate-bond exchange-traded funds set a clear precedent for the type of policy response that traders can expect during the next period of economic distress — or what section 13(3) of the Federal Reserve Act calls “unusual and exigent circumstances.” In contrast to the central bank’s Main Street Lending Program and Municipal Liquidity Facility, which didn’t get many takers, the Secondary Market Corporate Credit Facility revved up in a hurry and provided an even stronger backstop to financial assets than traders saw coming.

Recall that on March 23, the Fed unveiled the credit facility, explaining that it could buy high-grade corporate bonds and exchange-traded funds tracking that market. Then on April 9, it amended the parameters to allow for purchases of double-B rated junk bonds as long as the company had investment grades as of March 22. Just for good measure, it also added a provision that it could buy high-yield ETFs, even though that seemingly defied explanation.

By May 12, the facility was gobbling up ETFs, executing 35 separate trades totaling $305 million, according to disclosures to Congress. The next day it bought $330 million. And on and on it went until July 23, the last day the central bank added corporate-debt ETFs. By that time, it had switched over to individual bonds, seemingly by skirting the law and creating an entirely new class of eligible assets called “Broad Market Index Bonds.” Those purchases have continued unabated through at least Oct. 29, when the Fed bought debt of Amazon.com Inc., Kroger Co. and Visa Inc., among others.

It’s telling that the Fed plunged first into ETFs through secondary-market purchases. The central bank sought to ease financial conditions as quickly as possible, and corporate-bond ETFs, which trade transparently in real time and represent the broad market, are an easy way to do that. In fact, by the time the facility got around to buying individual bonds on June 16, the yield on the Bloomberg Barclays U.S. Corporate Bond index was already at a record low of 2.18%.

The ETF purchases were so successful, and so relatively effortless, that such a strategy is not only likely to serve as the blueprint for the next corporate credit crunch, but it also raises the obvious prospect of the Fed going even further during a market meltdown and buying another financial asset that trades on exchanges: U.S. stocks.

Powell didn’t exactly slam the door on this option when Politico’s Victoria Guida brought it up during his July 29 press conference. She asked: “What is the scope of your authority under 13(3)? What type of assets are you allowed to buy? Could you buy equities through an SPV, for example?”

We haven’t done any work or thought about buying equities. But we’re bound by the provisions of 13(3), which requires that we make programs or facilities of broad applicability, meaning it can’t just be focused on one entity. It has to be a broad group of entities. There’s a lot in 13(3) about the solvency of the borrowers. Remember, it was rewritten or amended after the financial crisis, and it was written in a way that was meant to make it challenging to bail out large financial institutions. There was a lot in there to make sure that they were going to be solvent and things like that. So we have to meet those requirements. We haven’t looked and tried to say, “what can we buy?” and “let’s make a complete list.”

None of this seems to preclude equity ETFs. Certainly, indexes tracking the broad stock market could include companies that are struggling to stay solvent. But in April, the iShares iBoxx High Yield Corporate Bond ETF (ticker: HYG) had 11.3% of its assets in bonds rated triple-C or double-C. The Fed’s facility now has a $325 million stake in it.

Guida even followed up to give Powell one more out to differentiate the Fed from the Bank of Japan, which has been buying equity ETFs for several years: “Is it generally supposed to be primarily directed at debt instruments, since you talked about borrowers?” Powell replied:

The statute doesn’t say that, but, yeah, you could read the statute that way if you want. Honestly, we haven’t tried to push it to, you know, what’s the theoretical limit of it. I mean, I think, clearly, it’s supposed to replace lending. That’s really what you’re doing. You’re stepping in to provide credit at times when the market has stopped functioning. That’s fundamentally what you’re doing with 13(3). And so I think you’ve got to sort of work within that framework.

In truth, the secondary-market credit facility never functioned like this once it was operational. It’s hard to see how buying ETFs, or even individual bonds on the open market, replaces lending. It mostly serves to prop up debt prices to encourage private lenders to engage in public markets. Ironically, the Fed program that would have actually stepped in to provide direct credit to corporations, the Primary Market Corporate Credit Facility, has never been used.

Mnuchin noted on Friday that Fed officials “always like to keep things open.” He added that while some other facilities would be extended for 90 days, “we don’t need to buy more corporate bonds.”

He’s right on both counts. As of the end of October, the Fed holds $8.6 billion of corporate-bond ETFs and $4.8 billion of individual securities. While that’s still just a fraction of the facility’s potential firepower, adding more debt in the secondary market with yields at record lows isn’t serving as a “backstop” in any sense of the word. However, I’ve argued for extending the lifelines for municipal and Main Street borrowing precisely because they’re only ever used by those who need it the most, like New York’s Metropolitan Transportation Authority, which is facing a fiscal reckoning.

It’s still unclear how much of Mnuchin’s decision was driven by prudence versus politics. Either way, Powell said in a letter released late Friday that the Fed would return the money to Treasury as asked, meaning the central bank’s corporate credit facilities will be shut down after New Year’s Eve, earlier than it anticipated.

That shouldn’t bother investors too much. Instead, they’ll likely take comfort in knowing what the central bank and Treasury are capable of in credit markets during the next unforeseen crisis and how that’s just a stone’s throw away from directly intervening in equities. For better or worse, the “Fed put” is here to stay.