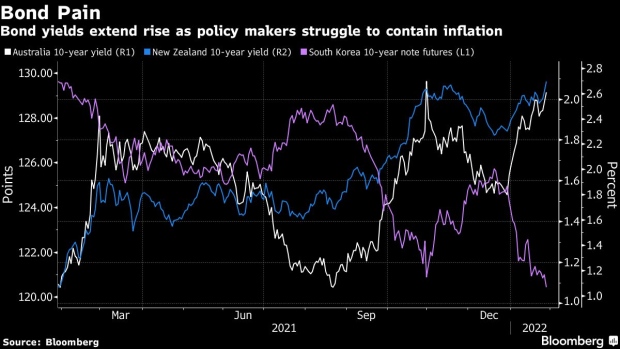 (Bloomberg) -- Hawkish comments from Federal Reserve Chair Jerome Powell will pressure economies in Asia to accelerate their own policy tightening, even amid broadly contained inflation and mixed pandemic recovery outlooks.

Throughout the region, efforts to prime economic rebounds while balancing currency and price gains will be challenged by volatility from the world’s top central bank tightening credit. Asian markets saw a a broad selloff Thursday, with equities, currencies and bonds sliding.

Indonesia has already adopted a more hawkish tone, saying just a day ahead of the Fed meet Wednesday that it’s ready to strike early to temper swings in the rupiah and bond yields. Singapore shocked markets Tuesday with a surprise tightening, with more expected in April. Hong Kong, which pegs the local dollar to the greenback, said Thursday it’s monitoring market developments and will maintain stability.

Looking ahead, according to analysts at Oxford Economics, the Reserve Bank of India will need to tighten and it’s likely that Malaysia and the Philippines will bring forward plans to raise rates. At least seven central banks in Asia have policy decisions coming up next month.

Most vulnerable will be emerging economies, where policy makers may need to stem investor outflows and protect their currencies, without choking their recovery.

“The Fed is the ‘global central bank’ and a more hawkish stance will pressure emerging market central banks to speed up their own normalization,” said Chua Hak Bin, senior economist at Maybank Kim Eng Research Pte. in Singapore.

In South Korea, whose central bank has hiked three times since last summer, Vice Finance Minister Lee Eog-weon said Thursday that it will closely monitor how financial markets react to the Fed and the government will take steps to stabilize the market preemptively.

The big standout is China, where the central bank is easing in order to support a slowing economy as inflation remains low.

The Bank of Japan is also sticking with a dovish approach as low inflation allows policy makers to focus on supporting growth.

Inflation pressures are still seen as moderate in Asia-Pacific compared to the rest of the world, according to forecasts from economists at Nomura Holdings Inc. last week. Prices in the region are seen rising this year by 2.9%, compared with 5.3% in the U.S. and 3.9% in the euro zone.

Even with relatively benign inflation in much of Asia, central bank policy will need to respond to the Fed. Those economies that rely on foreign investor capital and are nursing current account deficits will need to tighten more.

Currency stability will be a key concern, said Priyanka Kishore of Oxford Economics. “Given the external inflation pressures already in pipeline, central banks would be mindful to not add on to such pressures via a weakening currency, even if they do not explicitly target foreign exchange stability,” she said.