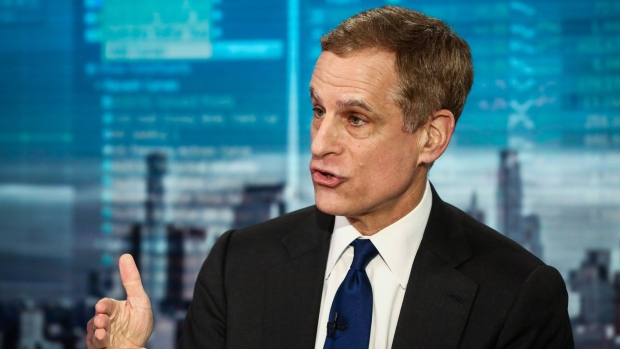 Robert Kaplan, president of the Federal Reserve Bank of Dallas, speaks during a Bloomberg Television interview in New York, U.S., on Thursday, Jan. 3, 2018. Kaplan said the U.S. central bank should put interest rates on hold as it waits to see how uncertainties about global growth, weakness in interest-sensitive industries and tighter financial conditions play out. , Bloomberg

(Bloomberg) -- The Federal Reserve should start tapering its asset purchases sooner rather than later and in a gradual manner, Dallas Fed President Robert Kaplan said, arguing that the massive bond-buying is leading to excessive risk-taking.

“I would be supportive of adjusting these purchases soon, but once we start the adjustment process, I would probably prefer to have it be more gradual,” Kaplan said in an interview this week with Joe Weisenthal and Tracy Alloway on Bloomberg’s “Odd Lots” podcast.

The Fed should cut monthly Treasury purchases by $10 billion and mortgage-backed security purchases by $5 billion, ending its bond-buying program in eight months, Kaplan said. Such a pace would also mean that the purchases of the two assets would decline in lockstep, as the Fed is currently buying $80 billion per month in Treasuries and $40 billion in MBS. Some officials have argued for reducing the mortgage purchases faster or first, given the surge in housing prices.

Kaplan spoke Wednesday, two days before Friday’s report showing U.S. employers added a greater-than-forecast 943,000 jobs in July, the most in nearly a year. The unemployment rate fell by a half percentage-point to 5.4%, marking a big step toward the Fed’s goal of “substantial” further progress in the job market that will add fuel to the tapering talks.

Fed officials began debating when and how they should taper asset purchases at their July meeting. The central bank started purchasing bonds at the start of the pandemic last year in an effort to inject liquidity into the market and buoy an economy rocked by widespread lockdowns.

Kaplan, who was one of the first officials to call for the start of tapering discussions, said that while not everyone on the Federal Open Market Committee agrees on the timing and pace, he’s glad the topic is being discussed.

He said the bond purchases aren’t particularly well-suited to addressing the current supply issues in the economy.

“We’re obviously having disagreements, but I think that’s healthy,” Kaplan said in the interview, which will be published to podcast platforms Monday. “I’m much more comfortable where we are right now than where we were a couple of months ago.”

Starting the tapering process soon may also help take some of the pressure off raising interest rates in the future, Kaplan said.

“Adjusting these purchases sooner might actually allow us to be more patient on the fed funds rate down the road,” Kaplan said.

Fed officials see two interest-rate increases in 2023, according to the median estimate, though seven of the 18 FOMC participants see one as early as next year. Kaplan is not a voter on the policy-setting FOMC this year.