Dallas Federal Reserve President Robert Kaplan said he is among policy makers estimating that the central bank will have to raise interest rates next year.

“There were some dots starting increases in 2022. And, you know, I’m one of those dots. Yes, absolutely,” Kaplan said in an interview on CNBC television Tuesday, referring to the Fed’s dot plot, which it uses to signal its outlook for the path of interest rates.

The dot plot from the March 17 meeting shows that officials expect no change in policy this year and borrowing costs near zero through 2023, based on median estimates, but four voters see an increase next year. The Fed kept its benchmark rate on hold for an eighth straight meeting after sweeping into emergency action amid the COVID-19 pandemic just over a year ago with a full percentage-point cut.

Kaplan forecasts economic growth of 6 per cent growth for this year and sees the unemployment rate declining to 4 per cent.

As the Fed makes makes progress in meeting its dual-mandate employment and inflation goals, Kaplan said he will be “an advocate of beginning the process of removing some extraordinary monetary measures, and doing it sooner rather than later. But I need to see outcomes, not just not just a strong forecast.”

The Fed has committed to continuing to purchase US$120 billion in assets monthly until there’s substantial further improvement on the mandate goals.

Kaplan said he expects price increases this year as companies work through supply and demand mismatches, but that inflation will settle down in 2022. “The jury is very much out” as to whether the U.S. economy will see sustained outsize inflation, he said. 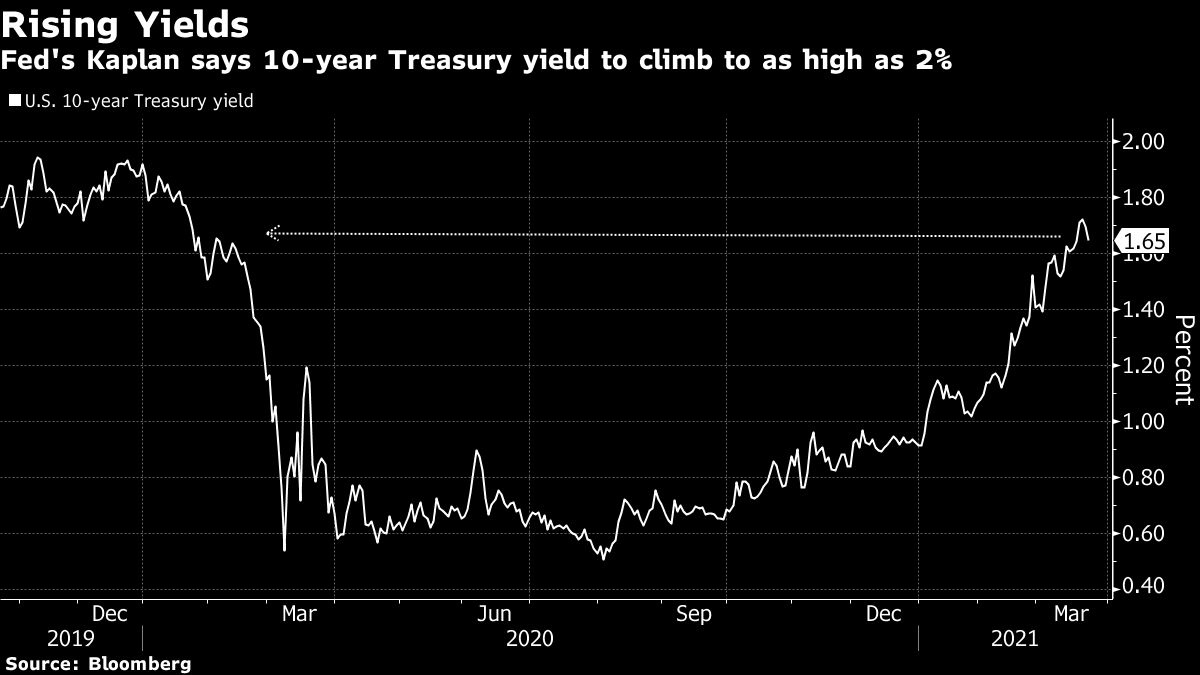 The rise in Treasury yields over the past month is a healthy signal and not alarming, Kaplan said, adding that the Fed shouldn’t come into the market to try and curb the sell off. He expects 10-year yields to continue to increase, to as high as 2 per cent.

The Fed has tools to blunt rising yields if it chooses to use them, including buying more longer-dated Treasuries, shifting asset purchases to government bonds from mortgage-backed securities, or targeting specific numerical benchmarks for yields, known as yield-curve control.

Kaplan said he wouldn’t support using monetary policies to control the curve “unless there are some extraordinary circumstances.”

Kaplan is not a voter on this year’s Federal Open Market Committee. He votes again in 2023.