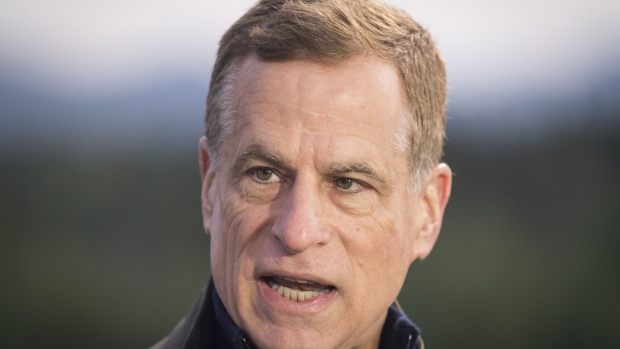 Robert Kaplan, president and chief executive officer of Federal Reserve Bank of Dallas, speaks during a Bloomberg Television interview at the Jackson Hole economic symposium, sponsored by the Federal Reserve Bank of Kansas City, in Moran, Wyoming, U.S., on Friday, Aug. 23, 2019. "Even though I am open to an adjustment either in September or the next few meetings, I prefer not to have to make an adjustment," Kaplan said, because it encourages risk taking. , Bloomberg

(Bloomberg) -- The Federal Reserve could allow inflation to accelerate above its 2% goal if has underperformed it in the past, said Dallas Fed President Robert Kaplan.

“I would be willing to see inflation run moderately above 2% in the aftermath of periods where we’ve been running persistently below,” Kaplan said Friday in a virtual event with the Dallas Friday Group, a business organization.

Kaplan said he would be comfortable with inflation around 2.25% or 2.375%. The policy, known as average inflation targeting, would be a shift from the Fed’s current way of keeping prices stable, in which it targets 2% regardless of what has happened in the past.

The Fed last year conducted a policy framework review after inflation struggled to persistently reach 2% in the last recovery. Fed Chair Jerome Powell, speaking at a July 29 press conference, said deliberations would be wrapped up in the “near future.”

How the Fed reacts to inflation will, however, be subject to what happens in the economy, Kaplan said.

“I’m not making a commitment of what we’re going to do, I’m basically suggesting a tendency or likelihood, but it’s going to be subject to conditions we find and we’re going to have to adapt to those conditions,” he said.

Subdued inflation before the pandemic allowed the Fed to run the economy hotter, which spurred traditionally marginalized workers to enter the labor market. The gap between White and Black unemployment reached a historic low last year. It has widened again since the onset of the coronavirus.

Kaplan said the Fed has given a clear indication of what monetary policy will look like for the next couple of years, with interest rates likely remaining near zero barring any economic surprises. Powell has said that the central bank is “not even thinking about thinking about raising rates.”

As the current crisis continues and with the virus resurgence not letting up, more small businesses are likely to fail, Kaplan said. Another round of the Paycheck Protection Program, which gave out $525 billion in loans before closing last week, will probably be needed, he said.

The Fed’s Main Street Lending Program, which so far has had little take up, currently can’t be accessed by riskier mid-size businesses, which wouldn’t meet its credit requirements. Fed leaders and their counterparts at the Department of Treasury, which approves the Fed’s emergency lending facilities, are continuing discussions on the program, Kaplan said.

State and local governments will also need assistance as they’re facing massive budget shortfalls amid lower tax revenue, Kaplan said. These entities have in some cases provided aid to undocumented workers, who don’t qualify for federal relief and have been particularly hurt by the pandemic as they are disproportionately employed in service-sector jobs.

Lawmakers in Congress have been debating another round of stimulus but are at an impasse, with Republicans and Democrats more than $1 trillion apart in what the total size of the package should be.

The U.S. economy, which contracted 32.9% on an annualized basis in the second quarter, will grow 20% in the three months ending Sept. 30 and 6% to 7% in the final quarter, Kaplan forecast. The economic recovery has been muted by the resurgence in coronavirus cases and will look “more like a swoosh” than a “V,” he said, adding that gross domestic product will contract 4.5% for the year overall.

Germany, France, Japan and South Korea have all helped policy makers understand the importance of widespread mask wearing and testing to containing the spread of the disease, Kaplan said: “We’re learning more from studying other countries, their experiences, to learn what we might be able to do better.”

Policy makers should be wary of how money is being spent during this crisis, given the substantial increase in government debt.

“We’re already leveraged more than we can realistically manage,” Kaplan said. “In the short run, I’d rather spend millions and, if necessary, billions on universal mask wearing, good testing regimes, contact tracing, in order to avoid spending trillions in unemployment benefits and all the ramifications of lost GDP.”